All Ye Know on Earth, and All Ye Need To Know 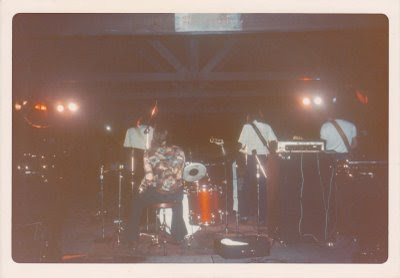 *
Gonna start dangling pieces of text here, if that's okay. Writing is going well, and I am on target to finish on time. But this is the stuff I spend my spare time on these days.

Of course, by the spring of 1964, a lot of other things were changing for boys on the brink of adolescence, too. The British Invasion was well underway, and the radio was the doorway to a whole new world.

Zion was quiet, and pretty isolated. But, Jeff remembers: “[it] was within radio reception of Chicago and Chicago’s AM radio in the early and mid-sixties was a phenomenal influence on every red-blooded adolescent that imagined themselves to be a pop star. It was a type of schooling that ingrains itself into your subconscious and feeds your imagination.” Elsewhere, he has noted, “New Beatles songs coming every few weeks and two new Beatles albums a year groomed us on pop music.”

John’s recollections are even more pointed: “It was like a 5-alarm brushfire when ‘I Wanna Hold Your Hand’, ‘She Loves You’ and ‘Please Please Me’ were unleashed in America…. All at once, the floodgates opened and every song from every band resonated with feverishly-sung melodies and lapel-grabbing guitar licks…. Talk about an embarrassment of riches – the AM airwaves were just dripping with tingly, jangly treasures and I’m fairly certain this is where we subconsciously learned about song structure and the mystifying appeal of aching, heart-twisting lyrics.”

Gary is more circumspect: “Any music fan who grew up in the 60s will tell tall tales of a utopian period where all was good. Imagine randomly pressing the buttons of your car radio and hearing nothing but glorious pop music 24 hours a day.…. I guess we all tend to have selective memories. …. All that great music still had to share radio airspace with the same kind of junk that we’ve always had to endure.”

Welcome to my world.

(*This is Skip Meyer's first gig, in Dwight, Illinois, sometime in August or September 1976. I like this shot because the contrast between the back and the front could not be more pointed.)
Posted by NYMary at 8:30 AM

It's a wonderful world...

I'm still having trouble adjusting to the fact that these guys were my contemporaries.

I always assumed that like everybody else at CBGBs (metaphorically speaking) they were at least ten years younger.

Most of those people -- the Ramones, for example -- were lying about their ages, of course.
:-)

steve,
Yeah, you're more or less of an age. In fact, I think you and Meyer are exactly the same age.