Long story short: In a bizarre bit of karmic convergence, my good friend David Klein, doing business over at the remarkable Merry Swankster blog, just weighed in with the latest in his brilliant Numerology series, with a superb piece on the history (and much more) of the often covered pop/rock classic "Route 66." (Check it out HERE, including audio of the original version by Nat King Cole and a couple of other cool covers.)

And a few hours after I read it, I found myself sitting in with some old friends' bar band in the wilds of New Jersey and actually singing the thing. You have no idea how weird this is, as the last time I performed anything publically all the women's parts were played by men and the show's protagonist -- Richard III -- was still alive.

Fortunately, no video of Thursday's performance has yet surfaced on YouTube, although I think somebody was cell phoning it so who knows. All I can say, ultimately, is yipes, and echo the comment one of the waitresses made to the owner: "Why is that old Rabbi doing punk rock moves?"

Anyway, "Route 66" is a song that has loomed large in my legend, as they say, for decades now. So here's hands down my favorite performance of it -- from The Rolling Stones 1965 EP Got Live If you Want. 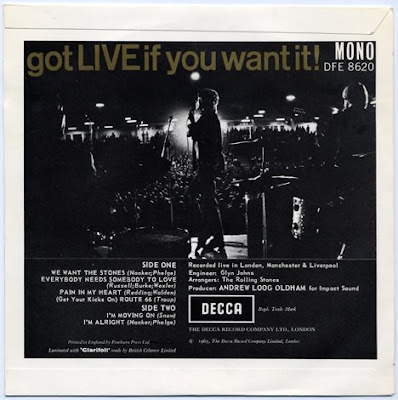 And isn't that back cover shot just the most evocative damned thing you've ever seen? There's no photo credit, alas, which has always bugged me; I'm betting it was taken by either David Bailey or Gered Mankowitz, but if there's a Stones completist out there who knows, please get in touch.
Posted by steve simels at 12:02 AM

Good stuff, but my put for "most exciting live performance by a band period" still goes to the Who's Magic Bus from "Live at Leeds". Bo Diddley on nitroglycerine...

I have a video of you performing this at my wedding, if you're interested. ;)

Well, in terms of group dynamics and the level of hysteria the band generates from the crowd, I'd still give the nod to this one.

Live at Leeds is obviously pretty great, of course.

And that wedding video is real; thank god my friend pythagoras doesn't know how to upload to YouTube.
:-)

Written by Bobby Troup, right? "R66" is like "Little Queenie" or "Six Days On The Road," as I know NO band versions of it. (Have one by The Long Ryders somewhere that is pretty cool...) - bill buckner

Bill, if you click on the link Steve provides in his first paragraph, you will find several, varied versions of the song, from the Cramps, Depeche Mode and others...along with a history of Troup and the song's origin...