Longtime readers may recall the saga of Something Fierce, the brilliant and brilliantly funny band I first wrote about here back in August of '07.

Well, I'm happy to report there's some big news on the band front -- to wit, an utterly amazing box set. 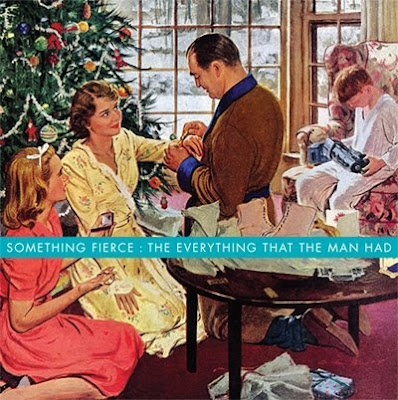 If you click play, BTW, you'll hear one of my Something Fierce faves -- the hilarious and gloriously melodic "Deep and Meaningful."

From 1983 to 1991 there was a band in Minneapolis called Something Fierce. Drawing from such classic influences as Elvis Costello, R.E.M., and the Beatles, SF made the catchy, brainy, danceable music that (their compatriot small liberal arts college grads) Fountains of Wayne was to hit it big with a decade later. They released six records in a variety of formats, and now most of them are long out of print. 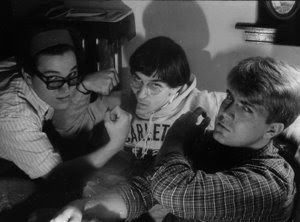 But, for a number of reasons, 2009 was the year for a gigantic reissue. Culling through stacks of nearly worn out board recordings, we've put together the official complete Something Fierce set, pre-ripped to MP3, over nine hours of music packaged on two data CDs with a 24-page deluxe booklet. It is available now and can be ordered online for the very reasonable price of $39.99.

That pretty much sums it up, except to say that the set has all their studio work, including amazing outtakes (like the beyond remarkable "Abducted By Your Face"), plus tons of great live stuff (including a cover of Spinal Tap's "Give Me Some Money" that has been making me smile for two days now) and that the deluxe booklet features reminiscences from critics and fans including yours truly. Here's a little of what I had to say.

"One song [from the set] deserves particular mention...specifically, 'Watergate,' in which [they] posit -- over a hilariously overdramatic instrumental bed -- that A Girlfriend From Hell is the metaphorical equivalent of the Nixon scandals and sustain the conceit for more than five fricking minutes. If nothing else, this must be the first song in history to contemplate rhyming 'spill the beans' with 'Haldeman, Mitchell and Dean,' and I would like to go on record, at this juncture, as saying that this song remains for my money the most audacious conceptual masterstroke on any '90s rock album by anybody. So there."

Strong words, and unminced, but I stand by every one of them. In any case, you can find the complete track listing, as well as order The Everything That the Man Had, over HERE.

Well -- what are you waiting for?

Incidentally, if you happen to find yourself in the Minneapolis area this weekend, the band -- Eric Tretbar, Jerry Lefkowitz, Dave Russ, Devin Hill and Al Bergstrom -- will be playing 2 sets at a Carleton College (their alma mater) reunion in Northfield on Saturday at 9pm. If you're comfortable with the idea, please crash the thing and tell the guys I said hello.
Posted by steve simels at 12:01 AM

So of course I have to be out of town this weekend. Drat. Thanks for the links though.

Who -- I think Mister simels is going to make a point of finding great music that you'll miss!

But he'll throw you an mp3 to overcome the pain.

Thanks for the tip, Steve; I've gotta go out an grab this. I could use a Spinal-Tap-derived laugh right about now . . . .

Myself, I am a fan of their ode to an oscillating fan! Thanks for the heads up Steve!

Oscillating Fan is one of their best.

Wow, don't think I've ever had such an immediate and positive reaction to one of your obscure picks, steve! (Usually they take a little while to grow on me.)

Lead singer is very reminiscent of the lead singer for the Smithereens. That's a good thing.

Boo! on them going straight to MP3, though.

Well, you get six studio albums. Plus another gazillion hours of outtakes and rarities.

I think putting it on two discs was the only practical way to do it.

It's a great package, is the bottom line.

Well, you get six studio albums. Plus another gazillion hours of outtakes and rarities.

That's what I get for skimming the text -- you get EVERYTHING?

Wow, that is a good deal.

I was amazed in 1988 to discover that the best band I ever saw was local, and saw Something Fierce play 100+ times (95+% attendance) before October, 1991. Thank you, Steve, for shining a light on my favorite band ever. I WILL be crashing the party.

Thank you, for obvious reasons.

Steve, just found this but thought I'd tell you, that set last night was the highlight of my year. They sounded great, and it was SO good to hear that music again. If you could gently nudge them to do that a few more times over the next few years, all us fans would appreciate it.

I have read the liner notes three times now and sampled the collection (of 9+hours). The compilation more than lives up to any hype it could possibly receive. I second John's comment.