The End of the Innocence

So Sunday I was channel surfing and I came across a Bruce Springsteen show from 2001 on FUSE; transplendent, actually, and I was pretty much an emotional basket case by the time "Thunder Road" came on. I gotta tell you, a certain shady dame is taking me to one of the upcoming Bruce shows at Giants Stadium for my birthday and god only knows what kind of a wreck I'll be at the end of that one.

Anyway, there was one song -- I don't remember which; at that point I was trying not to pay attention so as to prevent further strain on my tear ducts -- where everybody else in the front line (The Big Man, Little Steven, Mrs. Springsteen and Nils Lofgren) got to sing a verse or two solo, and I suddenly remembered why I've always loved Lofgren, who of course just nailed it.

And on that note, from his eponymous and utterly wonderful 1975 solo debut, here's Nils and perhaps the best song ever written about teen jealousy by an adult, the icily haunting "I Don't Want to Know." 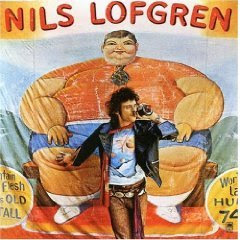 The thing I most love about this song -- apart from the fact it's quite unforgettably melodic in a Brill Building throwback sort of way -- is that it's obvious its high school protagonist really DOES want to know what his errant girlfriend is up to; he's just not willing to admit it. "I worry the sun and moon," he plaints, but then Nils sings the title line so cooly you almost believe that her infidelities aren't eating the kid up inside.

Speaking of the Brill Building, the album also features a poignant cover of The Byrds version of Carole King's "Goin' Back"; it's a great record overall, actually, and you'd do well to order it HERE if you have a little disposable coin.

I should also add that there's an absolutely sensational semi-official live bootleg of the tour Lofgren did supporting this, and if anybody out there reading this has a copy, we neeed to talk.
Posted by steve simels at 12:01 AM

That song was If I Should Fall Behind, a tearjerker even when just one person sings it.

The great FM rock station KSAN used to play an incredible live version of "Goin' Back" - think it's from a radio-only live album available (for the most part) as the "Back It Up" CD.

Lofgren's truly one of the most underappreciated performers in rock music.

Yes, Back it Up is the live album I was thinking of. It was a radio station promo A&M also sent to rock critics around the time the Nils solo album came out.

Hmm. Haven't had the pleasure of hearing this one, but I love Nils follow-up, Cry Tough.

Dude is one hell of an axe-slinger.

Totally OT, but Kid C posted this clip a few days ago, and I've been duly obsessed with it ever since. (This would be the teenaged David Minehan who would grow up to back Paul Westerberg on that SNL performance that you're always going on about. :)

a certain shady dame is taking me to one of the upcoming Bruce shows at Giants Stadium for my birthday and god only knows what kind of a wreck I'll be at the end of that one.

I remember that radio-live only record as well. Used to get a lot of airplay on HFS in the Bethesda years. REALLY satisfying stuff. I saw a memorable double bill with Roy Buchanan and Nils on New Year's Eve 1975 in Alexandria.