Down the Road Apiece

Okay, this is a little far afield from the mission statement, but I just love this record so I thought I'd share it anyway.

From 1955, here's the greatest rock piano man of them all, Amos Milburn, and his signature tune "Chicken Shack Boogie." 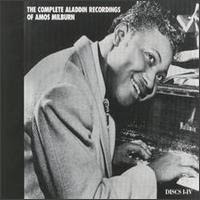 Actually, this is a remake. Milburn cut the original, hit, version in 1948; it's a sleazy barrelhouse gem, very proto-rock 'n' roll, but also a tad on the languid side. This one was done in New Orleans in 1955, with Milburn backed by Little Richard's crack studio band, featuring the amazing Earl Palmer and Lee Allen on drums and sax, and as you'll hear, it's taken at a dangerous tempo, threatening to careen out of control at any minute. Essentially, it's the punk rock version, a sort of 50s analog to The Ramones blowtorching their way through some 60s cover like "California Sun."
Posted by steve simels at 12:01 AM

The Glenn Gould of rock and roll. Thank you, Steve.

Well, that was a bracing way to start the work day!

(And btw, divShare has made this blog so much easier to enjoy - thank you.)

pass that bottle to me !
GB