Okay, this may be a little outside of our traditional purview, but did you know that Maurice Ravel's Bolero -- the four minute erotically-charged single that's the closest thing to powerpop in the entire classical music repertoire -- originally had steamy lyrics by the composer himself? 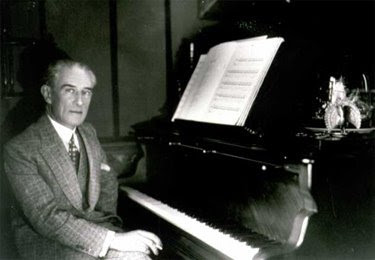 Fortunately, the lyric version has just been rediscovered and we are proud to present the premier recording, featuring Peter Michael Davis conducting the Independent Symphony Orchestra.

Enjoy -- but try to listen to it in the company of someone you love.

And a coveted PowerPop No-Prize will be awarded to the first reader who guesses who's the featured soloist and from whence the clip actually derives.
Posted by steve simels at 12:03 AM

That's Albert Brooks from his album "A Star Is Bought"..what didn't I win?!

Speaking of Bolero, anybody know why, for so many years, the LP of "James Gang Rides Again" excised the "Bolero" section from the power chord / slide guitar masterpiece The Bomber? Saw Joe Walsh play this in concert a few times, always wondered where the "Bolero" section was on the LP. Finally reappeared on his 2-CD "Look What I Did!" retrospective...

Why am I not surprised that somebody recognized this despite the fact that it's been out of print since 1974?
:-)

Jeebus, you could have at least thanked me for editing out the superfluous stuff from the end....

I have A Star Is Bought as well, and I didn't even have to listen to the clip to know what it would be.

Of course, I sometimes can't remember why I went into a room in the house...

That was Albert Brooks?

It's not possible! He wasn't whining or sniveling!

I believe that it was edited out of "The Bomber" because the notoriously litigious Ravel estate threatened to sue.

Ravel, and his estate are a bit nutty about people doing variations, particularly speeding up the tempo.

I believe that it was edited out of "The Bomber" because the notoriously litigious Ravel estate threatened to sue."

Interesting. I hadn't realized Ravel wasn't in public domain yet. He is in most countries as of last year, but in his own France he's under copyright until 2015. A little Wikified digging unearthed this interesting bit: