For your, uh, edification. I am now drowning in in shots like this. 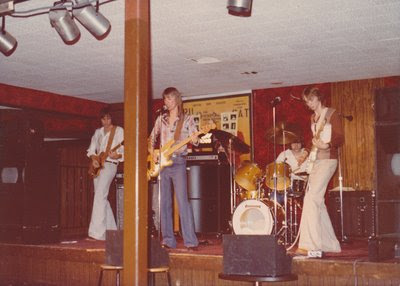 This is Shoes' first live gig: at The Brat Stop, Kenosha, Wisconsin, April 8, 1976. The hotel I stayed in was mere steps from this place, though it's burned down and been replaced in the meantime (The Brat Stop, not the hotel). Correct pronunciation for those not from the upper midwest: brAHt, as in Bratwurst: a hot dog stand.

Note: Gary Klebe has no microphone: he was not singing at this point. (Requests have been made by anonymous but interested parties to photoshop out the bellbottoms: these requests have been summarily denied. This is history, people!)

Working on the site now: Boys Don't Lie: A History of Shoes should be available for preorder within a week or two: expected publication, September 09, to correspond with the thirtieth anniversary of Present Tense.
Posted by NYMary at 5:54 PM

Note to self: early gig photos of venerable power pop bands less popular than one might expect.

Those bell bottoms? I'm reminded of the Dennis Leary joke about having whole families living in your pants back in those days. As in whole families of gypsies.

On the other hand, I'll put that photo against any shot of Blue Ash or -- in hipster Manhattan -- Alan Betrock faves The Marbles and it will be just as embarassing.

steve,
Yeah, I think it was a general societal cringe rather than a personal one.

Here, for example, Gary will point out that he pulled a shirt from his bag and some eager staffer took it off to a laundry to be pressed, resulting in an almost military crease down the sleeve. Cringe again.

But this is 1979. Rod Stewart was prancing around in red satin hotpants. By those standards, who can complain about a crease?

I guess that's why Johnny Rotten sang "And we don't wear flares!! in "Seventeen."

Why wasn't Gary singing? He was singing on the albums. I did notice in clips from recent live shows that only 2 would sing at a time - no trademark Shoes 3 part harmonies on the clips I've seen. Wonder why. It seems whoever was playing lead guitar wasn't singing.

Shoe,
Gary sang on Heads or Tails, but obviously not One in Versailles. The way they tell it, he was pretty convinced that that point that it was unnecessary that he sing, that the Murphys had it covered, so his natural reticence kicked in. Didn't sing on Bazooka at all. Started Black Vinyl Shoes not singing (John sang Fatal, Jeff the chorus on Not Me), but in there somewhere they talked him into it, to all our delight. But this is before that.

What's keeping commenters away is fear of a bell-bottomed planet.

And I confess a woeful ignorance on my part--I'd never heard of these guys before I began lurking on this particular blog. I don't *think* they got any airplay in the Detroit area when I was growing up, although I may be wrong.

befuggled, try here or here, they might ring a bell. But maybe not.

you call those flares? i wore a pair twice as wide working as a busboy at the local horse track. ah, the summer of "We're an American Band."

Just look at those Kenosha kids.