This won't come as a shock to anybody, but one of the nicest perks, if that's the word, of writing here over the last two years is that people have been moved to turn me on to some very cool music I would have never have otherwise heard.

But of all the songs I've been hepped to since NYMary gave me the spare set of keys to the car, as it were, I think this is the one I treasure most (and special thanks to Kid Charlemagne, whose encylopedic knowledge of some of the more obscure byways of pop and rock is a continuing source of amazement to me). 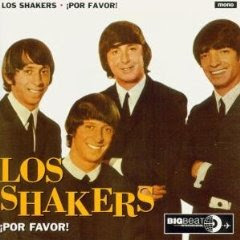 Los Shakers were in many ways one of the archtypal 60s rock stories -- four kids from Uruguay who saw A Hard Days Night and flipped (like everybody else their age worldwide) and subsequently formed a band. Except they actually got signed by the Beatles parent record label (EMI) and became huge pop stars in South and Latin America (they were considered gods in Argentina, apparently).

Oh, and made absolutely wonderful records that live up to the source of their initial inspirations.

Case in point: "Always You." Seriously -- this is EXACTLY what the Beatles would have sounded like circa the soundtrack to Help if they had grown up South of the Border rather than in Liverpool. In short, as gorgeous a happy/sad pop tune as you'll ever encounter, with every little instrumental and vocal detail simply beyond perfection; I absolutely turn to jelly when that chiming Harrison-esque Rickenbacker twelve-string comes in at the top of the second verse, and I don't care who knows it.

BTW, you can see Los Shakers perform the song (in lower-fi mono) in a club scene from what is apparently a Latin version of an AIP beach party flick over at YouTube HERE.

For more on these guys -- who have credibly reinvented themselves as disciples of Astor Piazzolla since a 2005 reunion tour -- check out their estimable official website.
Posted by steve simels at 12:01 AM

What a poppy way to start the day.

A lot of groups like Los Shakers were featured on Nuggets II (one of the best big-ticket impulse buys I ever made), but of course that box was more oriented towards the middle-to-late 60s rather than the British Invasion years. I'd have to look, but Los Shakers may even be on the Nuggets II box.

Funny, this ties in to 2 recent conversations I've had with people about the Beatles' impact on music and the world (you were part of one online conversation yesterday, steverino) -- the farther we get from those days, the harder it is to convince people how cataclysmic they were -- the world really was divided into B.B. and A.B. and anything else is revisionist history....

Los Shakers are on Nuggets II -- a terrific rocker called Break It All.

These guys were really good.....

Dwight Twilley has a similar story about seeing "A Hard Day's Night" and deciding to start a band too. Gummo is absolutely right. I don't think there will *ever* be a band that has been as culturally and musically influential as the Beatles. Great tune BTW.

BTW, Steve, you should check out We All Together, the Peruvian Beatles... :)

Nuggets II is a wonderful collection.

David Crosby has a similar story. Him and McGuinn saw A Hard Days Night and they just knew what they had to do...

Back in the early '80s,there used to be a band of New Zealand ex-pats in New York called The Drongos. They played a kind of skiffly pop not a million miles away from, say, Squeeze, and often busked on the streets of NYC. They also played Ithaca a lot. One of their best songs was called "Eye Of The Hurricane", which was about growing up in the middle of nowhere, antipodean style, and then seeing "A Hard Day's Night" and realizing what you wanted to do with your life.

Wow, wow, wow. That is a great pop song.

the DivShare thingy is not working for me again.

I'd really like to hear this one, can you fix it, please!!!