A true, and probably self-induglent, story:

Sometime in late '73 or early '74, a large and mysterious package addressed to me arrived at the offices of the Magazine Formerly Known as Stereo Review, with a label that said "Trademark of Quality Records," and a postmark from San Francisco, but no return address. When I opened it, I found, to my surprise, a stack of 30 or 40 LP albums. All bootlegs. Each more amazing than the next, including these two --

-- which featured cover illos by a (then unknown to me) comic book artist named William Stout.

And when I say amazing, I'm not kidding; there was Dylan stuff up the wazoo, including the Albert Hall concert, another Yardbirds package (on colored vinyl!) featuring liner notes where the bootleggers interviewed singer Keith Relf about each track in detail, Pete Townshend's home demos, tons of Stones, including the '72 Garden show in glorious off-the-board stereo and a seven-inch EP of live at the BBC r&b covers -- 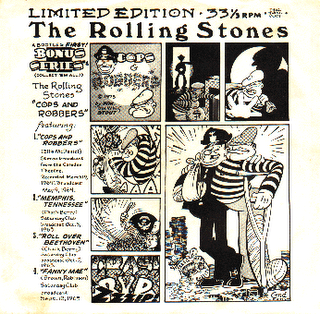 In other words, just ridiculously great and in some cases -- a '66 acoustic Dylan set from Australia in perfect sound -- life changing stuff.

And a note: "Dear Steve -- we've been reading you and we think you might like some of this. Enjoy!"

I never found out who had sent me the package, but over the years I followed Stout's career with interest, and was perhaps inordinately pleased when he moved over into movie work; I remember in particular how tickled I was when I saw he'd done production art on the Invaders From Mars remake and the Masters of the Universe flick. (He has slightly tonier stuff to his credit, BTW; more recently he worked on Pan's Labyrinth, and cooler than that it does not get).

Anyway, the other day, while researching an obscure David Carradine movie -- The Warrior and the Sorceress -- for today's Box Office, I discovered that Stout had a writing credit on it, so with the intention of picking his brain about it and some other stuff -- figuring this was as good an excuse as any to finally get in touch with him -- I gave him a holler.

Turns out he's a thoroughly charming guy with a lot of (as you might imagine) interesting stories. But just before I hung up I told him about the package that had arrived at SR all those years ago, and how much I've always wanted to thank the people that sent it, whoever they were.

He laughed, and then finally said "I'll tell them."

I think there was an implied wink, but I'll probably never know.

Meanwhile, when you get a minute, go over to Bill's official official website, which has lots of other cool art and reminiscences, and definitely behooves beholding. You'll thank me.
Posted by steve simels at 8:18 AM

Mr. Stout did the cover for the latest Smithereens album. You can see it here:
http://flashenhanced.com/thesmithereensplaytommy/

A lot of the boots you mention were "holy grails" for me in the 70s, stuff I haunted college record stores and then later Greenwich Village basement record stores to find. I think I may still have the '66 Dylan in Australia record with Stout's cover of Dylan in a kangaroo's pouch (not the color version, though).

On this subject I can highly recommend Clinton Heylin's book, "Bootleg," about the history of the rock bootleg industry. Chapters of wonderful anecdotes and reminiscences are interrupted by incredibly dry chapters on international copyright law, but the whole thing is worth the slog, and for anyone who grew up during that era hunting down a copy of the Beatles' Abbey Road outtakes (for example), it's a stroll down memory lane. Stout and his amazing cover artwork is prominently featured in the book and he has some great stories to tell, as well....

Dude -- you have the Dylan australia boot?

Yep, those boots were the gold standard! I had that Yardbirds boot at one point, but it was confiscated by an ex-girlfriend...

Hey Steve, those records are worth a lot of money still, especially the Beatles Xmas records.

How's the progress on the Brains song coming? It can't be a Holy Grail thing, someone must have it. Sal Nunziato is waiting for it too.

It was great talking with you, Steve. I loved the comments regarding my work on your site, too.

Since your site is called "Power Pop", are you aware of The Heaters? They were a great Power Pop band, the hottest band in L. A. in 1979/1980. I recently did all of the packaging and wrote the liners to their CD release "The Great Lost Heaters Album." Check it out if you get a chance.

In addition, I recently designed and illustrated the packaging for The Moore Brothers' "Aptos" CD. It's pop, but not not what I would call power pop (it's pretty acoustic and reminds me of The Wackers).

Bill -- I vaguely recall the name the Heaters, but not much about them...I'll definitely check the album out.

A few years ago I got Mr. Stout to autograph a couple of those above mentioned bootlegs at a comic con! Everyone else seeing him was presenting him with copies of his dinosaur books to sign so he got a kick out of being presented with the boots. He truly is a great artist and a real gentleman.

The Golden Age of Bootlegs, when you'd buy something for 25 bucks and find out it was near-studio quality or recorded under a blanket on a Realistic cassette recorder 250 feet away from the stage.

BTW, Blogger FD13NYC mentioned something about Brains - if he's talking about Tom Grey's Atlanta band, I may be able to hook you up.

The Heaters were great... another coulda/shoulda band.

The Internet seems to have killed the physical bootleg business... but people still hunt for (and pay top dollar to get) the LPs and CDs. Which raises the question: are you more of a fan if you want the physical item or if all you really want is the music? :)

Hi MBowen, yes yes. I'm looking for the original indie 45 version of Money Changes Everything by The Brains. Not the version when they signed to Mercury later. If you could hook me up with an mp3 of that it would be greatly appreciated. Thanks, Frank

And Alex, yes, very few new physical bootlegs being produced these days -- but there are people, such as the wonderful Purple Chick folks, who produce digital works of high quality and included in the digital downloads are complete covers, liner notes, etc.

A new way to produce quality product similar to what TMOQ did in the 70s and Vigotone did in the 90s.