Great Lost Singles of the 21st Century (An Occasional Series)

You know, there's been a lot of talk around here about how I only post incredibly old songs. Geriatric ones, even.

But seriously...please enjoy a little beat number that's a mere two years old. From England, it's the charmingly monikered Noisettes and their charmingly abrasive "Don't Give Up." 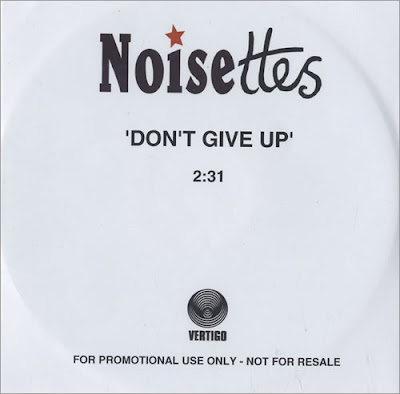 To my ears, this is the kind of thing The Yardbirds would have done had they been born three decades later, which is to say a kind of punkish, hepster mix of Mose Allison-derived blues and downtown 80s Arto Lindsay guitar skronk. In any case, I think you'll agree that, as the Tom Hanks character says in That Thing You Do!, it's got a lot of pep.

The Yardbirds comparison is a good one. The song grew on me.

The Mose Allison comparison is a good one. I think they've also listened to a few Pretenders albums.

Ultimately a bit too cutesy-poo. A lot of that going around.

by the way, they are now a euro-pop band for their second lp, which disappoints me to tears.

oh well...i'll discover you a new band just pour toi, monsieur Simels. My favorite of teh moment are The SOUNDCARRIERS, fantastic retro psyché-pop (with a hint of - oh horror- jazz) from the very un-psychedelic London. Perfect summery pop.

And anybody who names their first lp Harmonium is a winner for moi.

If you want RAWK, may i suggest a duo of girrls from London & Glagow called We Rock Like Girls Don't. Yep, that's their name. Silly but it says it all. Brings me back to The Runaways :-)

and hey, that Twilight actress might be a great Joan Jett!

I really enjoyed this one Steve! Thanks!