It Came From the Basement (Part II)

Attentive readers will perhaps recall Part I of this series, but if not, the short version is that I recently got back together with some old high school garage band pals I hadn't seen for ages. These are guys with whom I spent an inordinate amount of time in the 70s making defiantly low-fi DIY powerpop albums in a dank Jersey basement, which is to say about a decade before Guided By Voices honcho Robert Pollard did something similar in the late 80s/early 90s and thought he was so cool.

And we called ourselves The Weasels, which is a better fricking name, too.

But I kid the great Robert Pollard and his epic beer hangovers.

Anyway, I've been rummaging through our tape archives, and I was pleased to find the original reel-to-reel master of our very first effort together, circa 1970-71. We called it The White Album (for a variety of reasons, none of which need to be dredged up all these years later) and to my surprise, it's not as embarrassing as it might be.

Here's my sole contribution to it as a composer/performer -- actually, my sole contribution of that nature to our entire oeuvre, as under most circumstances I couldn't write a song if you put a gun to my head. It's a brief folkie instrumental-- that's me on both the left and right channel acoustic guitars -- titled succinctly, and with the boundless imagination that I've long been known for, "Steve's Song." Heh. 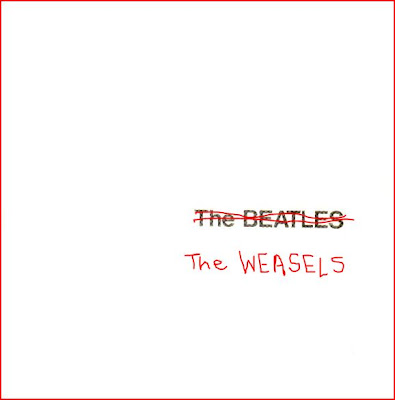 As you've probably noticed, the piece stems from a period I spent (perhaps overspent, actually) listening to certain Stephen Stills records. I should also add that the guitar on the right channel originally sounded as crisp and trebly as the one on the left, but a certain degradation of the original tape over the years proved impossible to repair. I still think the whole thing is kind of cute, in any case.
Posted by steve simels at 12:01 AM

Very nice, very sweet, not what I expected at all (something electric & poppy). You're a man of many talents.

That's pretty much the extent of my skills as a guitarist, alas.

Nice one. Thanks for taking the time and having the ego strength to post these things. We all enjoy reminiscing with you.

There's Pete in his '59 Plymouth! And Uncle Muck!

Thanks - & don't lose this - I may just beg you to use it as the background for our next Tierra Madre video - that is, if you don't charge LiveNation-type rates!

Tonight in the lounge - Steve Simels IS Stephen Stills in "Manassas: A Tribute"!

Massive Beer Hangover would make a great band name. I suggest you copyright it.

The former drummer from the Meat Puppets came up with another dandy: Temporary Bong Ethos.

Trey - who was in a Southern Rock band called Buck Private And His Guitar Army.

What you left out in your modesty was that the last few notes are harmonics that a lot of us still cannot play. Just an old Weasel in old Weaseltown.

Do you remember us playing that as a duo somewhere live? I played it in regular tuning, while you played it in dropped D, to startling effect! And you crushed the harmonic at the end. Because that's how we rolled.


That was tasty, steve. Real tasty.