Cover Versions We're Not Quite Certain About (An Occasional Series)

[Weekend Listomania remains on hiatus for one more week. But it will return next Friday, swear to god. Really. We mean it. -- Ed.] 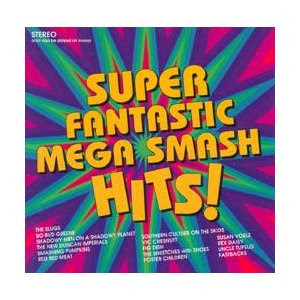 If truth be told, I came rather late to the Southern Culture party, which is to say I mostly ignored them until 2010's Kudzu Ranch album, which struck me as some of the most convincing more or less traditional guitar rock I've heard in ages. So when I chanced upon this earlier effort a few weeks ago I was a bit taken aback. On the one hand, their sort of beatnik rockabilly take on the tune is, in the abstract, a perfectly valid approach, and on the other the actual track has a certain overly self-conscious primitivism to it that reminds me unpleasantly of The Cramps, who I've never really been able to take.

I will stipulate, however, that it's way better than any of the remakes I've heard in TV commecials in the last couple of years, so that's something.
Posted by steve simels at 12:01 AM

These guys are Vienna Philharmonic compared to the slop-a-billy stumblings of the Crammps. But you're right: too self-conscious. A Peggy Lee "Fever"-toned "Venus" done in cool earnest would be a gas.

Kudzu Ranch was in my Top 10 of the year. The band has really come a long way since the early "Too Much Pork For One Fork" attack of the early days.

Check out "Liquored Up & Lacquered Down" if you don't already know it, or their follow-up of covers, "Plays Countrypolitan Hits." Both signed me up for good.

I've enjoyed this little number for a while now. Tried to get my ex-cover band to play it, didn't go over so well with the keyboardist...who later suggested we do "Shambala" by Three Dog Night. Asshole.

I really like this band, they're the real thing. See also: "Banana Pudding".

Oh, is that a B.W. Stevenson tune?
My Maria, I did not know that.

The guy also didn't like my choice of the Bootsy Collins cover of "The Joker". Seriously, he was a real peckerhead.

Southern Culture does a killer version of "Merry Christmas, Baby" - completely different music, same lyrics. They ever throw in some vocals on Lennon's old filter...