So I'm reading Keith Richards' Life at the moment; so far, it's absolutely fascinating, and I haven't even gotten to the part where he and Mick start to get the Stones together.

More to the point, toward the end of Chapter Two, Keith talks about records he actually owned in his formative years, rock and rockabilly LPs and singles that shaped his musical tastes circa 1959, and he mentions a couple of "forgotten jewels." In particular a 45 I will confess to having never heard or heard of -- Johnny Restivo's "The Shape I'm In."

Which turns out to have a rather, er, interesting pedigree. 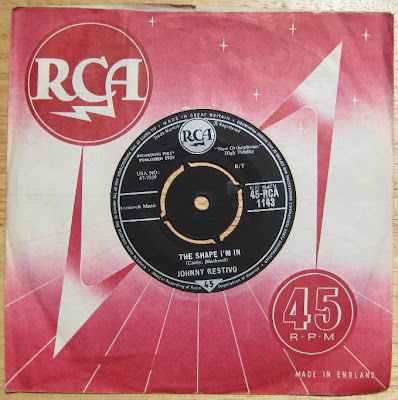 Johnny (John Charles) Restivo was born in the North Bronx, New York September 13, 1943. He enrolled in Cliffside Park Junior High School, New Jersey and was graduated in June of 1958. In 1959 Johnny was discovered by Joe Mulhall and Paul Neff and in June 9, 1959 he recorded "The Shape I'm In" and "Ya, Ya" at RCA Victor in New York City with Paul Simon (aka Jerry Landis) playing guitar on both tracks.

Not a bad little record, I'd say (and it's certainly still startling to hear early rock stuff like that in such excellent stereo). But on balance it strikes me as a tad (shall we say) inauthentic, at least compared to the Elvis and Buddy Holly records Keith was grooving on in 1959.

On the other hand, compared to most of the homegrown Brit rock that was around at the time it probably sounded like a work of genius. But that's a subject for another post.
Posted by steve simels at 12:04 AM

I thought he was listening to more early blues. I guess that happened when he hooked up with Brian, haven't read the book yet.

"Probably recorded in the same studio that "Whatever Shape Your Stomach's In" was recorded in, five or so years later. Inauthentic, yes, but with an authentic genius playing undistinguished guitar. I love how pop mixes everything up. Thanks for tracking this down and putting it up.

I love those 2 strums that punctuate the end of every sung line.

And the key change is cool too.

Keef's book is tremendous, a real warts and all self-portrait. He doesn't shrink from portraying himself as the kind of selfish, zealously single-minded guy you have to be to be a success in the music business. But when he talks about music, all that drops away and the love comes thru, esp. the love of discovery, whether it's discovery of a new song, a new lick or a new way of recording.

I don't know if he still goes there, but when the Stones were in Philly, Keith would go to R&B Records in Upper Darby, where he could browse through an immense warehouse of obscure singles.

It is a little antiseptic, but still jaunty and jolly.

I'm so used to Dave Edmunds' sort of zydeco cover it is something of a revelation to hear the original.

When I read about Johnny Restivo (my son gave me the book for Christmas) I really wanted to hear the record. And now I can - thanks, Steve.

Life does what I think autobiography is supposed to do, immerses you in the personality of its subject. He's obviously a burnout who can't stay on-topic to save his life, but he's an honest burnout and doesn't leave much out. The Dickensian guttersnipe-with-a-heart-of-gold thing does wear thin by the end, perhaps at the point where he attacks a guest at his daughter's wedding with a sword for taking an onion off the counter while he's cooking.