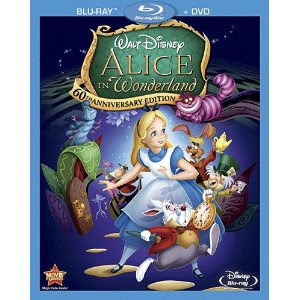 Video Event of the Week: Might Criterion's DVD upgrade of maverick filmmaker Sam Fuller's wildly stylish 60s melodramas The Naked Kiss and Shock Corridor be what we're talking about? Is it conceivable that Summit's Blu-ray of Red, with Bruce Willis and a bunch of older folks including Helen Mirren and Morgan Freeman playing spy games, could make the cut? Or is there the slightest chance that the respective Music Box discs of The Girl Who Kicked the Hornet's Nest, the third installment of the Swedish film adaptations of those Stieg Larsson thrillers, are actually The One(s)?

All worthy, perhaps, although without seeing it I'm still reasonably certain that TGWKTHN sucks as much as the first one (which I have seen, in case you're wondering). But in any case, for my money it simply has to be Disney's DVD/Blu-ray combo pack of the 60th anniversary edition of the animated Alice in Wonderland.

This was one of the first Disney titles to make it to home video, beginning on VHS and Betamax(!) back in 1981 and it's been more or less continuously available in the various evolving formats ever since; there was a restored DVD in 2004, but apparently it's been bumped up to high-def for the current edition. In any case, it's especially nice to have the 1951 Alice available in such a gorgeous transfer after the serious misfire that was last year's Tim Burton version (or as we like to call it around Casa Simels -- Alice, Warrior Princess). Which is to say that I think this is still -- in its only slightly Disney-fied way -- the most faithful of the many film versions to both the spirit of the Carroll story and to the original Tenniel illustrations. Without question, it's the most charming.

I should add that it's also the most psychedelic and scary, even after all these years; here's the Cheshire Cat scene, which gave me the creeps big time as a kid and still induces some very trippy frissons. The Cat's voice, in case you can't quite place the actor, is by the incomparably funny Sterling Holloway.

As you can see from the above excerpt, the restored film is in splendid shape and the new transfers are visually stunning, with color you could eat with the proverbial spoon (the Blu-ray is to my eyes merely incrementally better, but as is customary it's also stuffed to the gills with more extras than the DVD, including a clip of Uncle Walt introducing an airing on the Disney TV show from 1969). Both discs have a previously available making-of featurette (Reflections on Alice) and -- best of all -- give you the option of choosing between a clean-as-a-whistle version of the original mono soundtrack or a quite convincing digital 5.1 surround version juryrigged from the same elements.

In any case, this is a generally flawless presentation of one of Disney's finest efforts from the Golden Age; you can -- and very definitely should -- order it here.

And with that out of the way, and because things will be pretty quiet around here for the next couple of days, here's a fun and hopefully relevant little project to help us wile away the hours:

Best or Worst Version of an Often-Filmed Story, Classic or Otherwise!!!

Of all the adaptations of classic novels from Hollywood's heyday, this one has to be the most stirring. Starting with Colman, born to play the role, obviously, but let's say a word for Edna Mae Oliver's Miss Pross and Blanche Yurka's Madame DeFarge; their catfight is only one of several scenes in which both actresses manage to steal the picture out from under the rest of the huge and wonderful ensemble cast.

Eastwood's frame-for-frame spaghetti western is the most famous, but I've lost track of how many other versions (credited or uncredited) of Kurosawa's masterpiece are out there, including the sci-fi remake with David Carradine. Most of them suck, of course, although I will admit a certain fondness for Walter Hill's Prohibition era gangster adaptation (Last Man Standing) with Bruce Willis.

Mel's Jesus torture-porn epic, and despite the fact that it's idiotic and kinda anti-Semitic, it compensates by being unwatchable.

And the Numero Uno thrice-or-more told tale pretty much has to be....

Langella had already made a splash on Broadway in a revival of the Dracula stage play, done semi-tongue in cheek with black-and-white set designs by cartoonist Edward Gorey. So of course somebody at Universal thought it would be a smart idea to star him in an irony-free blood-and-guts color version directed, without a hint of style or Gothic poetry, by the same nose to the ground hack who would later make Short Circuit. Pretty awful, including Laurence Oliver's middle-European accent.

Alrighty, then -- what would YOUR choices be?
Posted by steve simels at 7:46 AM

You know you could have an entire best/worst list just based on Dickens adaptations? :)

I made it through about 12 minutes of an early 80s BBC adaptation of Pickwick recently. Might as well have been an audiobook.

Um, did you see de Niro as "The Monster"?

Did you see Branagh pulling out antique cutlery with which to eat scenery?

What -- no love for "Gnomeo and Juliet?"

Oh, where to begin!

David Copperfield (1935) -- Despite racing thru the story in a Cliff Notes-like version, there is so much right about this -- the look, the feel, and especially the casting (W.C. Fields IS now and forever Mr. Micawber, as even he knew at the time, it was a role he was born to play) -- that it ranks as one of the best-ever Dickens adaptations.

1933 also saw my favorite Alice In Wonderland, the one from Paramount Pictures and starring just about everybody. The girl who plays Alice is a bit over-the-top but everything else about it just wonderful and it mixes episodes from Alice and Through the Looking Glass seamlessly.

The Island of Dr. Moreau has been filmed a bunch of time but the creepiest has to be the 1932 (or '33?) version with Charles Laughton and Bela Lugosi. Brrr.

The real-life teenage-murder-spree of Charles Starkweather and his girlfriend was filmed a few times, but one of the best is The Sadist (1963), made for pennies and starring, of all people, Arch Hall Jr., in the only role he's actually proud of, and he has every reason to be. You watch him and it's easy to believe this guy's crazy and will kill you for a bottle opener. Or for nothing at all.

What -- no love for "Gnomeo and Juliet?"

Speaking of Alice in Wonderland: Does anyone remember an animated "updated" TV version from the late 60s or early 70s, featuring the voice of Sammy Davis Jr. as a beatnik Chesire Cat?

Speaking of Alice in Wonderland: Does anyone remember an animated "updated" TV version from the late 60s or early 70s, featuring the voice of Sammy Davis Jr. as a beatnik Chesire Cat?

Here's a sequence of like-themed movies (not identical stories, per se) that peaks early:
The Seven Samurai
The Magnificent Seven
Silverado
A Bugs Life

Best version of A Christmas Carol - the one starring Alistair Sim. Hands down best portrayal of Scrooge out there.

"Pride and Prejudice" --- yes, Greer Garson and Lawrence Olivier are too old for the parts, but they're so charming you don't care. And Edna May Oliver as Lady Catherine de Bourgh is fall on the floor funny. The Keira Knightly version, otoh, is unwatchable. But my absolute favorite is the BBC production with David Rintoul as Darcy.

Best version of A Christmas Carol - the one starring Alistair Sim. Hands down best portrayal of Scrooge out there.

Hell, yeah. I watch it every year.

Though Mr. Magoo comes close (and no, I'm not being facetious).

I also vote for the Alaister Sim version of Christmas Carol, but the George C. Scott version comes in a close second.

I'd also nominate the George C. Scott version of Beauty and the Beast as the best.

Adding Johnny Weismuller as Tarzan movies of the 30s as the best of that genre.

What? Like *none* of you ever swung on a rope and gave the Tarzan yell when you were kids?

As Walt died in 1966, that must have been really creepy;>

The Zeffirelli version of Romeo And Juliet is also a favorite, too. I can't think of a way to improve that (and the crappy Baz Lurhman version was terrible...)

I seem to have gotten that Disney date wrong. Although it's possible it was an animatron....
:-)

I know it's French and Cocteau so doubly pretentious but the best Beauty and the Beast is Cocteau's La Belle et la Bête.

And the thought of Sam Fuller being released as Criterion collection is too funny.

Hey isn't there a Pat Benator song..
"Film is like a battleground"
:)

Hey, Criterion makes some strange choices. Equinox is on Criterion.

The movie where the Devil is a forest ranger.

And a big yes! to Johnny Weissmuller's Tarzan and the 1938 Warner Brothers' Robin Hood. There are no others. Just like the best and ONLY James Bond movies are the Sean Connery films.

And there was at least 1, maybe 2 other versions of The Maltese Falcon, but John Huston nailed it for all time.

The Mark of Zorro with Tyrone Power, Basil Rathbone, and Linda Darnell.

"Hook" did everything wrong. It might have been better if they'd cast Robin Williams as Tinkerbell and Julia Roberts as Peter Pan, instead of the other way round.

I've already ordered Disney's Blu-Ray "Alice". If it looks anywhere near as great as the Blu-Ray "Fantasia" it will be a very good winter.

It actually looks better than "Fantasia," which had a couple of moments where the color looked a little bogus. This one is just perfection....