Just gotten to the point in Keith Richards' vastly entertaining autobiography where he and Mick are starting to try and write songs -- their initial efforts not being deemed good enough for their own band, of course.

Mick and I spent months and months trying to write before we had anything we could record for the Stones. We wrote some terrible songs whose titles included "We Were Falling in Love" and "So Much in Love," not to mention "(Walking' Thru the) Sleepy City," a rip-off of "He's a Rebel." Some of them were actually medium-sized hits...I wrote a forgotten gem called "All I want is My Baby," which was recorded by P.J. Proby's valet Bobby Jameson.

That last sounds interesting, actually, but meanwhile from 1964, please enjoy The Mighty Avengers -- of whom I can find no biographical info other than they seemed to have hailed from Coventry -- and their version of the aforementioned early Jagger/Richards songwriting foray "So Much in Love." 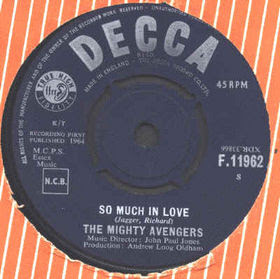 And from their 1980 debut album, here are punkish pub-rockers The Inmates (of "Dirty Water" cover fame) and a version that sounds -- I suspect -- a lot more like the original Jagger/Richards demo. 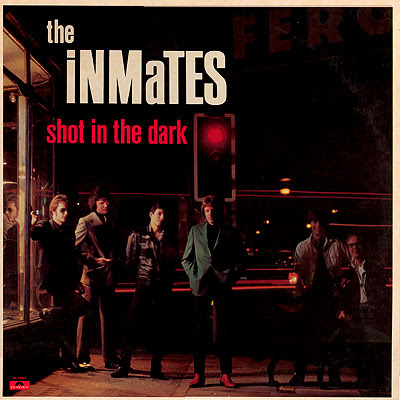 I say "I suspect" because I can't seem to find a downloadable version of said demo version anywhere on the intertubes; if anybody knows where it might be found, I'd be forever in your debt if you'd post a link.

In any case, I've loved that Inmates cover since a vinyl promo copy arrived at my old offices at the The Magazine Formerly Known as Stereo Review. And I'll bet a Stones live version back in the day would have sounded absolutely fabulous on stage, regardless of what Keith now thinks of the song.
Posted by steve simels at 8:00 AM

Got no links to the demo, but here's a couple of links to info on the Mighty Avengers:

Interesting to have both versions, thanks, steve.

The more recent is certainly more Stones-ish, but I think the Mighty Avengers' version is more "authentic" in the sense that, to have a British pop hit in 1963-64, a song had to have that Merseybeat sound, which this version definitely does. And I love the 12-string acoustic guitar on the Avengers' version.

I collect a lot of unreleased Stones and I don't think I've ever come across a Stones version of So Much In Love.

Man, I love this song. Never heard it before. So much better than "That Girl Belongs to Yesterday" which they foisted off on Gene Pitney in 1964.

I stumbled across a Stones bootleg sometime in the last year with "So Much in Love" on it, but I seem to have misplaced the link.

Pretty sure the thing exists somewhere...

Dammit, steve, you know that's only going to set me off on a protracted search....

Love the Buddy Hollyishness of this tune, melodically and thematically. Its right in the pocket, genre-wise. The Searchers, or Rockpile, would have done this perfectly.

There should a Nobel category for those Glimmer guys, learning how to write songs by sheer force of will, starting from scratch, using trial and error, and eventually, becoming masters.

Nice title on The Inmates album.

those Inmates LP's are awesome, ripe for rediscovery.

I wish the Inmates albums were available on CD, or even download.

Both Inmates albums were available on import Japanese CDs in the 90s -- shouldn't be too hard to find.

Wow. Nice. Gonna have it stuck in my head for a while - which is not a bad thing at all.