I've said it before, and I'll say it again -- it still amazes me that there's obscure late 60s pop and rock left to discover that's actually really good.

From 1968, and the all but forgotten album Pilgrim's Progress, please enjoy wiseguy L.A. singer/songwriter Mark Levine (also all but forgotten) and his hilarious and oddly haunting "Going to the Country." 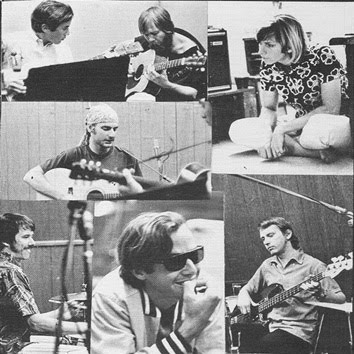 That's Levine in the shades in the picture. The girl -- Kathy Deasy, presumably the spouse of producer/guitarist Mike Deasy -- may or may not be the one from the song.

Despite the stellar personnel, the album was originally released on Hogfat Records, which must have been either a vanity label or the least heralded indie imprint in rock history. Of Levine, I can find absolutely no biographical information whatsoever, or any clue to his subsequent career (if there was one).

The album itself is uneven; as somebody over at Redtelephone66 said, some of it sounds like Levine was trying to make the greatest rock record of all time and some of it sounds like he was just goofing around with some friends. In any case, "Going to the Country" simply slays me, especially that single note bass-line climb at the end of every verse.
Posted by steve simels at 6:46 AM

I like Kathy Deasy's intent look. That's why we became musicians, to have girls look at us like that. A search shows Mrs. Deasy to have sung backup on Helen Reddy's "I Am Woman" and sessions by Johnny Rivers, Kenny Loggins and The Byrds. We also see that she and Mike Deasy are still recording as backup musicians in 2009! Congratulations to that marriage for surviving the 70s.

And let us not forget that he played the most famous bass guitar part in history -- on the Byrds' "Mr. Tambourine Man."

And Bridge Over Troubled Water.

Have you been reading my mail?

Simels, here's a question only you may be able to answer:

Was Periwinkle Blue a brand of LSD back in the day (a la Orange Sunshine)? Levine seems to have a definite fondness for it on this album.

Strikes me as very Ray Davies-ish. Seems like a year or two later, this could have been a serious FM hit. What an awesome back-up band.

Speaking of which, somebody paid big bucks to hire A-list Wrecking Crew players, especially to end up on a thoroughly unknown label.

(Not to quibble, but Carol Kaye played some pretty famous bass parts too.)

The answer to your acid question is -- I dunno. I know I don't recall ever hearing that name for LSD, but maybe it was a West Coast thing.

Incidentally, somebody suggested that Levine might have been related to Phil Spector's great engineer Larry Levine in some way, but I looked up his obituary online and he does not seem to have had a kid named Mark.

Could be a cousin, of course. In any case, the guy really seems to have fallen off the face of the earth -- absolutely nothing about him on the web.

You are way overrating this song. Does little for me.

The music is LA studio stiff, he's not that interesting a singer and except for the knockers joke the lyrics are nothing. The production is dry and uninspired.

Did I miss anything?

Program something rockin' and nasty for tomorrow.

"Did I miss something?"

Not hearing it Steve; guess I need to listen to the entire record.

Mark Levine shared a house with me in 1965. At that time he was a solo acoustic performer who specialized in songs by Jimmie Rodgers (the blue yodeler)...he performed them rather nicely. Ry Cooder visited our place a time or two. He always pronounced his surname Le-VINE (rhymes with mine).

I had nothing to do with the making of "Pilgrim's Progress" but I did write a not entirely impartial review of it for Rolling Stone, and also played a few tracks on KMPX in San Francisco when I worked there in 1971.

Like Barry Hansen, I was a friend of Mark's at the time he made this record, and I just informed Steve that Mark is alive and well in San Rafael (California). A correction about the photos. The guy in shades is Ry Cooder. Mark is the dude with the bandana tied around his head. I'm glad to know him.