A Tomb With a View

And speaking as we were the other day of the late Gerry Rafferty, and how there was much more to him than the ubiquitous "Stuck in the Middle With You" and "Baker Street" -- from 1978, and the unreleased at the time original version of Richard and Linda Thompson's great Shoot Out the Lights album, here's the Rafferty produced version of the chilling title song. 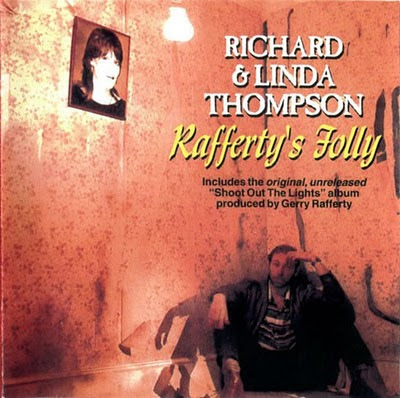 I've been meaning to post this for a while, but seeing it over at Never Get Out of the Boat must have motivated me. In any case, I hadn't heard the Rafferty stuff for a few years, and I remembered thinking the later Joe Boyd version of SOTL, which is considerably stripped down by comparison, was rather more to the point. Listening to the above yesterday, however, has changed my mind; in fact, I now rather prefer the extra bit of studio sheen that Rafferty gives to Richard's melancholic minimalism.
Posted by steve simels at 12:25 AM

How was the Prince show?

Why don't you post the Boyd version so we can compare and discuss?

As for the official SOTL versus Rafferty's -- sounds like a good idea.

the vocal is so different. The voice of a distant spectator...full of resignation.
On the Boyd version he's angry, pissed, impassioned. Fits the song better.

Where is Never Get Out Of The Boat?

If you see anything there you want -- and trust me, you will -- download it as fast as you can. The site has been shut down twice in the last couple of months, presumably by the Blog/Copyright police.