Because a record that remains in my all-time power pop Top 10 -- The Hollies' 1965 "Look Through Any Window" (written by the great Grahame Gouldman) -- can only sound better... 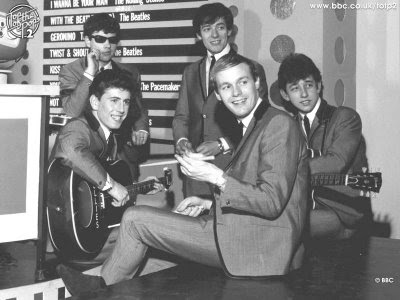 Can't you just smell the elitist chardonnay and runny cheeses they were scarfing down while they recorded this?

Seriously, I stumbled across it and a bunch of other Hollies rarities the other day; naturally, I immediately gravitated to the previously unknown to me foreign language track. It is, of course, no secret that you're dealing with a guy who considers The Monkees Italian version of their tv show theme to be one of the most important cultural artifacts of the second half of the 20th century.

Oh, BTW, and harkening back to our little discussion about "You Didn't Have to Be So Nice" a while ago, I think we can all agree that if this record (in either language) isn't bona fide power pop, then nothing is.
Posted by steve simels at 12:03 AM

Singing in their non-native language affects their vocal attack, slowing it down, making it sound draggy. You lose the soaring exhilaration that drives the English version. But this is power pop indeed. This doesn't sound like anything - pop, folk, jazz, vocal harmony group -- that came before. It's harsh, vital, youthful, crashing, and terribly alive. And where are the instruments? You barely notice the guitars in the best Hollies songs. No one thinks of them as instrumentalists, but they must have been great players.

Apropos of everything, during one of my blog trawling days, I found French E.P. collections for both The Hollies AND the Spoonful. I should point out that both of these collections sound better than any of the remasters I've heard by these bands. I'm sure you know about these, but if you didn't...
:)

This doesn't sound like anything - pop, folk, jazz, vocal harmony group -- that came before. It's harsh, vital, youthful, crashing, and terribly alive.

Amen. And a lot of that is down to criminally underrated guitarist Tony Hicks electric 12-string riffage, which is as potent as anything Pete Townshend ever did with the instrument, and the kinetic beyond words interplay between original bassist Eric Haydock (playing a six-string before anybody else in England, or rock generally) and drummer Bobby Elliot, who was always the band's secret genius.

I was amazed that it took so long for them to be inducted into the Rock & Roll Hall of Fame ...

Amen ten times over on Tony Hicks and his 12-string playing, and the overall Hollies musicianship. Since your posting of them with the Everly's a few weeks ago, I've been going through YouTube's stock. In one TV segment, Hicks is playing an acoustic 12-string (Framus?) with a pickup on the English version of this tune. In footage for I'm Alive, Nash is working a Vox 12-string. These guys were so hip.

First record I ever bought - the 45 "Look Through Any Window". Still have it. Still love it!

I just listened to it again, and when you can't understand the words, you focus on other things, and can really hear what great singers and musicians they were ...

I'm a bit late to the party, but I've always loved this (crap quality) clip of Petula Clark singing Sign of the Times in French. In particular, the groovy discotheque setting.
http://www.youtube.com/watch?v=gas4kp-QyRU

>I think we can all agree that if this record (in either language) isn't bona fide power pop, then nothing is.

As awesome as "Look Through Any Window" is, it holds not one power-pop candle to "I Can't Let Go."

...not to mention to the most awesome power pop song of all time, "I Wanna Be Your Boyfriend" by the Rubinoos...