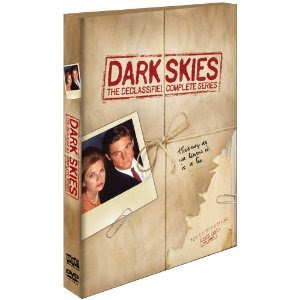 [As noted yesterday, the List is back, albeit in slightly altered form on a trial basis. -- Ed.]

Video Event of the Week: Might Dreamworks' DVD of the splendidly monikered Paul Rudd/Steve Carell comedy Dinner for Schmucks be what we're talking about? Does Sony's Blu-ray of David Fincher's creepily effective making-of Facebook docudrama The Social Network deserve the nod? Or could Fox's respective disc versions of Machete, the over the top Robert Rodgriguez recasting of a 70s Blaxploitation flick as a Latino revenge epic, conceivably be The One(s)?

All worthy, to be sure, but for my money it's got to be Shout!Factory's fab new 6-disc box set of Dark Skies: The Declassified Complete Series.

Dark Skies, which ran for 18 episodes in the 1996-97 network season, was one of the many paranoid conspiracy sci-fi shows that sprang up in the wake of The X-Files. It wasn't the best -- for my money, that honor goes to Nowhere Man, with the great Bruce Greenwood -- but it was hands down the most ambitious, featuring as it did a Unified Field Theory of Everything. Everything, in this case, being all of 20th century history beginning (more or less) with the Roswell UFO incident of 1947, after which the show went on to posit alternative explanations for real life events as disparate as the Kennedy assassination(s), the New York City blackout of 1965, The Beatles first appearance on the Sullivan show, and the death of What's My Line? panelist Dorothy Kilgallen.

Boyishly likable Eric Close -- in the first of many failed series he was asked to carry before some smart producer realized he'd be better as a supporting character in an ensemble show like Without a Trace -- starred as John Loengard, an idealistic liberal twenty-something who comes to Washington in 1962 to work for a Democratic congressman and, for various convoluted reasons, runs smack into the heart of an extra-governmental conspiracy so vast it boggles the imagination. The show's secret weapon -- beyond the smashingly rendered Kennedy Era detail, including a terrific use of period music -- was, however, the late great J.T. Walsh as one of the ringleaders of said conspiracy; Walsh, who died shortly after the show was cancelled, was one of the most dependable character actors of recent years, and on Dark Skies, his genuinely frightening aura of Regular Guy menace was used to particularly good effect.

Here's Shout!Factory's DVD trailer to give you an idea of the show's overall mise-en-scene. Not to mention a glimpse of pneumatic co-star Jeri Ryan, for all you Star Trek pervs.

Shout!Factory's presentation of all of this is exemplary; the transfers look and sound great, and there's all sorts of supplemental stuff -- running commentaries, making of docs, the two hour international pilot -- to keep you busy. The bottom line, of course, is that you can -- and on balance, should, I think -- order it over at Amazon here. That would be the same Amazon, of course, that dropped Wikileaks, an irony that may or may not have any direct connection to the show's premise.

And with that out of the way, and because methinks it will most likely be a tad sleepy around here for a couple of days, here's a fun little project to help us wile away the hours:

Best or Worst Movie or TV Series Clearly Inspired By/Stolen From an Earlier Movie or Series!!! 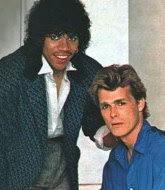 A black guy and a white guy as a pair of investigative reporters for a national magazine. Think Don Johnson and Phillip Michael Thomas in Miami, except without the charisma and with worse music ("Just a Job to Do" by Genesis was the theme song).

More Corman-produced mishegass. This movie wanted to be Bonnie and Clyde in the worst way, although thanks to Angie Dickinson and Tom Skerritt, not to mention William Shatner(!), it turned out quite a lot better than you'd expect. Incidentally, Shout!Factory just put out a very nice DVD of this, paired with its somewhat lesser sequel.

The Corman factory strikes again, this time knocking off Alien. Joanie from Happy Days stands in for Sigourney Weaver, which should give you some idea of the film's level of inspiration. Shout! Factory just released a pretty good remastered version of this one as well.

And the Numero Uno homage a fou in the history of Le Cinema or the teebee clearly is....

C'mon -- like the first time you saw it you didn't go "Oh -- Kolchak the Night Stalker."

Does "Buffy The Vampire Slayer" count? Movie was crap, but series was excellent.

And there are really too many horror/suspense movies to count here that probably all stem from any Hitchcock film. Any "animal attacks" movie owes everything it can pay to "The Birds", for example.

And all monster on the loose movies ultimately derive from the silent "The Lost World."

""Dark Skies" and "Nowhere Man" both ended up suffering from the same problem - over"thinking" by the suits at their respective networks. "Nowhere Man" had a total takeover of the production by the front office morons, who threw out creator/producer Lawrence Hertzog about halfway through its run (although IIRC, they were meddling incessantly almost from the beginning). I think things were more subtle with "Dark Skies." Both shows petered out with incredibly dissatisfying "final episodes" - "Dark Skies" mostly because it squeezed about an entire season of rushed ideas and events into one episode; uncertain whether "Nowhere Man's" wrap-up bore any relation to Herzog's original thinking."

Angie Dickinson had a famous nude scene in "Big Bad Mama;" I've heard about it but not seen it. Now's my chance!

I was always very fond of Pete and Gladys, with Harry Morgan and Cara Williams. Pretty much the best of the I Love Lucy clones.

For the record, I love your Cinema Listomanias, and am sorry to hear they won't be at Box Office anymore. Unfortunately, I don't have your memory for schlock films and series so I never comment. Quel dommage!

That's very kind of you to say, and I thank you.

Ok, I'm not good at this stuff either and as always, my memories tend to be from the dark ages before half the people here were born. But I'll play.

Best spin off ever from TV series to TV series, is Pinky and the Brain from the Animaniacs, both of which I LOVE.

Have to reach into the dusty archives of my brain for movie/TV spinoffs. For some reason all I can think of is my favs of widowed husband with cute housekeeper or kid category. Those being The Farmer's Daughter and The Courtship of Eddie's Father.

And another movie to TV fav from the olden days, and truthfully I don't even remember the movie but I loved the tv show The Ghost and Mrs. Muir.

As for the worst, I didn't actually watch any episodes, but I'd nominate the Caveman sitcom that they were trying to spin off from the stupid Caveman commericials.

"Buckaroo Banzai" was a fine rip-off of the Indiana Jones vibe, and if I had the dough, I buy up the rights and turn into a TV series. "Black Hole" was a dark, dark Disney meditation on "Star Wars" whose score had a great hypnotic riff.

Well it's not exactly a B movie, and I'm going back 25 years too far -- but you don't have the "post-Elvis" rule on these ones do you...? Anyway, I saw it the other day, so I will say Orson Welles' "The Stranger," which was not an homage to Camus, but a clear sub-set of Hitchcock's "Shadow of a Doubt," with a touch of "Double Indemnity" in his use of Edward G Robinson. Maybe Welles was at loose ends after the tragedy of Magnificent Ambersons and It's All True, but at any rate he jumped on the brand new "small town noir" genre that Hitchcock had basically created the previous year, put himself in the Uncle Charlie role -- with a Nazi twist and as a new husband instead of a favorite uncle. Otherwise... pretty much the same movie. Not as good as Shadow of a Doubt, but still an entertaining and stylish warm up for "Lady from Shanghai."

More in the "B" spirit -- I'd nod to any horror movie made after Gremlins that was titled with one cutesy plural word -- Ghoulies, Critters, Munchies.... Any others?