And speaking as we were yesterday about the section in Keith Richards' vastly entertaining new autobiography in which he recounts his early songwriting efforts with Mick Jagger:

Mick and I spent months and months trying to write before we had anything we could record for the Stones. We wrote some terrible songs whose titles included "We Were Falling in Love" and "So Much in Love," not to mention "(Walking' Thru the) Sleepy City," a rip-off of "He's a Rebel." Some of them were actually medium-sized hits...I wrote a forgotten gem called "All I want is My Baby," which was recorded by P.J. Proby's valet Bobby Jameson.

Here's the song in question; I don't know if it's a forgotten gem, but it's better than "That Girl Belongs to Yesterday," which Mick and Keith foisted off on the usually discerning Gene Pitney, I'll tell you that for free. 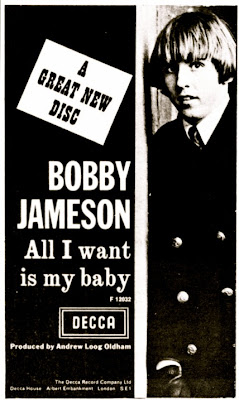 I should add that the fuzz-guitar solo toward the end is almost certainly the work of one James Patrick Page rather than the song's co-composer.

I should also add that Jameson, who went on a to reasonable career in pop music, including some work with Frank Zappa later in the 60s, has a bone to pick with Keith, and not just about that "P.J. Proby's valet" crack.

From The Guardian UK, right after Keith's book came out last November:

Richards and [Andrew] Oldham wrote "All I Want Is My Baby" and Bobby Jameson sang the lead vocal on both sides of that single. Keith is listed as the musical director on the record, while Oldham is the producer, with Jagger, Oldham, and Jameson all singing back up vocals.

Says Jameson: "The real problem I have with Richards remark is that I was never paid a penny for doing this record. It was released as a single worldwide on Decca and London Records, and can be found on multiple albums of Rolling Stones involved work since 1964.

In the last forty five years I haven't gotten anything for it, so it seems belittling me at this point, after I already got fucked over by Oldham, Richards, Jagger, Decca, and whoever else has had anything to do with the record is a little pathetic.

If you're going to badmouth another artist I would suggest that it not be one you screwed out of any money you might owe him Mr. Music Director."

1. Par for the course in those days.

3. And to Keith's credit -- I guess -- nowhere in his autobiography does he paint himself as a particularly nice guy. Especially the way he pisses all over Brian Jones's corpse is pretty jawdropping.

He really has almost nothing good to say about Brian, except that he was a good guitarist in the beginning.

For what it's worth, however, apparently nobody else who was around then has much good to say about Brian either.

I would take it as a Four Seasons B-side or album cut, very happily. They'd've handled it nicely.

Oh this is a fantastic song. Its really great.

One of the worst songs and records I have ever heard.

I wouldn't brag on it.