Warning: Do Not Operate Heavy Machinery While Listening to This Song

From the amazing and mind-altering piece of cheese that is the Nirvana Sitar and String Group's 1968 psychxploitation album Sitar and Strings -- please enjoy their thoroughly confounding cover of The Box-Tops' "The Letter." 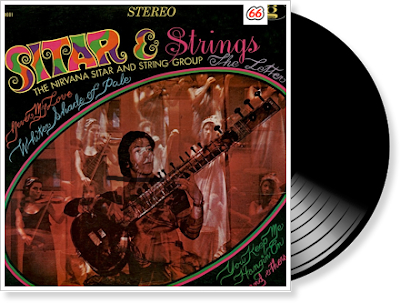 Seriously -- this thing just makes me dizzy. I haven't felt so weird listening to a song under the headphones since the first time I heard The Shaggs' Philosophy of the World.

This came out on a subsidiary label of Audio Fidelity Records. For our younger readers, Audio Fidelity was an oddball outfit that mostly made schlocky stereo LPs designed for the the hi-fi nut market. The bulk of their product was low-budget classical stuff (Scheherezade played by a pick-up orchestra) and sound-effects discs, but they also dabbled in pop. In fact, I was recently surprised to learn that they issued an American version of the debut album by my beloved Los Shakers, an LP that -- had I heard it in 1966 -- would have changed my life in unfathomable ways.
Posted by steve simels at 7:59 AM

Quite nice! Just quirky enough to not be totally annoying and schlocky. A little touch of Esquivel in the night.

My dad had one of those stereo demonstration discs. It had at least a couple of trains coming and going, but the big thing I remember was the ping pong game!

How can you not love this? It's giving me madras hallucinations. I hope someone has set this aside for the next Austin Powers movie.

All it needs is an elevator;>

Is that a Phillips 66 oil company logo in the top right? It would be perfect if this were an album given away as a "freebie" by the local gas station, from the golden age of such promotions.

No, alas -- that's a chyron or whatever you might call it for the photos over at redtelephone66, which is where I got the track.

Great site, if you don't already haunt it.

Something to play the kid who says, "Your generation got all the good music."

Audio Fidelity also released the awesome Jim Messina and the Jesters, a surf LP by the your-mama-don't dance-and-your-daddy-don't-rock-and- roll-guy.