Okay, this isn't one of the "forgotten jewels" Keith Richards raves about in his autobiography, but back in 1971 he did a Rolling Stone interview in which he went on at some length about Billy Fury's 1960 LP "The Sound of Fury." 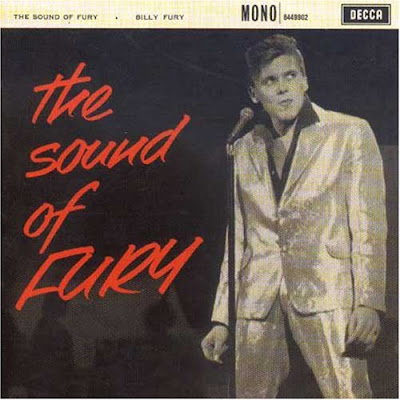 Which he rated as pretty much the only really good pre-Beatles Brit rock album for a lot of reasons, including the fact that Fury wrote all the songs himself, recorded it without extraneous production touches (no strings or crying yeah-yeah girls) backed by his own crack stage band, and generally acted as his own producer.

At the time of the interview, of course, there was really no way for an American to see what all the fuss was about without buying a plane ticket to England and haunting UK used record bins; the album, like most of Fury's records, had never been released in the US, and it was long out of print in his homeland. In 2000, however, at the dawn of the Amazon era -- a time when it was still relatively difficult to find obscure music for free on the Net -- I found myself with a little disposable income and so I ordered an import CD of the finally reissued "Sound of Fury." I remember that I listened to it a couple of times, thought it was pretty good, especially for a Brit act of the day, but that nothing on it really killed me. I'm pretty sure I gave the CD away after that, actually.

Reading Keith's Life, however, especially the bits about his early listening habits, I got curious all over again, and so the other night I found a downloadable version of an even newer reissue of the album, this time in gorgeous stereo. Here's "My Advice," which strikes me as the most representative thing on the record.

The rest of the tracks are equally nice -- Fury may have been, shall we say, an Elvis impersonator, but he was a damn good one -- and Joe Brown's lead guitar work is really stellar throughout. Alas, none of it kills me, though, still. I guess you had to be there.
Posted by steve simels at 12:01 AM

That's a pretty cool song, and I was thinking, could that have been a hit in the U.S. in 1960? Then I looked at the Billboard Hot 100 from that year and thought, "no way." Billy Fury's "My Advice" would have been up against "Cathy's Clown", "Stuck on You", "The Twist", "Everybody's Somebody's Fool" and dozens of other bright, high-concept masterpieces from America's deep and diverse musical well. (Also on the charts that that year, "El Paso", "Sink the Bismark", "Itsy Bitsty Teenie Weenie Yellow Polka Dot Bikini", "Walk Don't Run", "Mule Skinner Blues", "Beyond the Sea", "Walking to New Orleans" and many, many more.) American recording artists and producers had gotten the hang of top 40, and were pumping out piles of innovative, supremely catchy product. Billy Fury sounds regressive compared to most of the Top 100 in that high-water year. It would be another 20 years or so before anything as backward-looking as "My Advice" would sound new again.

Perfectly nice Buddy Hollyish song that I agree would have been lost in the shuffle.

With a name like Billy Fury, I was expecting something...furious. Between the sound and the photo, the name borders on parody.

While it is nothing special, it did show Keif that Brits could do this sort of thing with aplomb.

There's actually some other stuff on the rest of the record that compares favorably to some of the album cuts on Elvis' early stuff, pre-Army but post-Sun.

Of course, the fact that it's Brits rather than guys from Memphis may give it a certain Dancing Bear quality, i.e. it's not that its necessarily done well, but you're just surprised that it's being done at all.

Sit down, son, let an American show you how to do that...

Depends how you listen to it. It's supposed to be Anglo-Elvis, but the backing could be the Modern Lovers (post David Robinson, that is). Good clean fun.

Cool! I think I can hear Joe Brown's influence on George Harrison, too. And it may be somewhat OT, but it never ceases to amaze me how well some of these Brits nailed American diction.