An Early Clue to the New Direction: Special Burning Down the House Edition)

From February of 1977, please enjoy the baby Talking Heads (without Jerry Harrison) and their very first (pre-debut album) single "Love → Building on Fire." 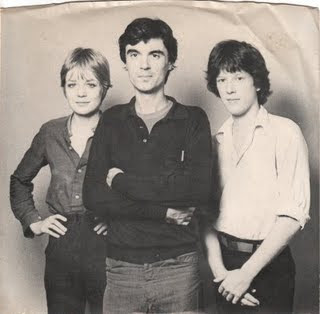 God, wasn't Tina Weymouth just the cutest thing in the world? Like Marianne Faithfull in a trash compactor.

True story: I went to some trendy SoHo loft party once that she attended; the Heads were just getting famous at the time, but she wasn't married to the drummer yet, and she was there unescorted, as they say.

The long and the short of it is that she just sat by herself, looking very lonely, in a big chair the whole night, and not a single one of the myriad hepster guys in attendance had the nerve to go up and talk to her.

In any case, a coveted PowerPop No-Prize will be awarded the first reader who gleans the clip's relevance to the theme of tomorrow's Weekend Listomania.
Posted by steve simels at 12:28 PM

Songs that are actually 2 songs put together?

And BTW, that's still one of my favorite TH songs.

Does it have something to do with the producer, who is the father or uncle of Jon Bon Jovi?

Songs with one of the elements (wind, water being the others) in the title?

Songs featuring horns in the arrangement?

good lord. Marianne Faithfull in a trash compactor. I think I love you.

Songs about buildings and food.

Okay, it's a SPECIFIC building.

The prison thing is great, and I'm going to steal it.