From Hell It Came

So on Friday, over at his fabulous Burning Wood blog, our good friend Sal Nunziato posted a link where you can download the original records redone by David Bowie on his album of 60s covers Pin Ups. 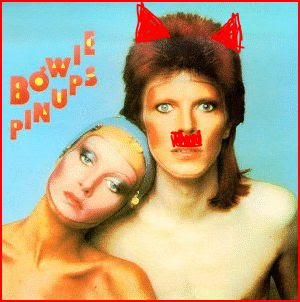 The records in question? All fabulous, but if you don't recall them off the top of your head they are:

Rosalyn- The Pretty Things
Here Comes The Night - Them
I Wish You Would- The Yardbirds
See Emily Play- Pink Floyd
Everything's All Right- The Mojos
I Can't Explain- The Who
Friday On My Mind- The Easybeats
Sorrow- The Merseys
Don't Bring Me Down- The Pretty Things
Shapes Of Things- The Yardbirds
Anyway, Anyhow, Anywhere- The Who
Where Have All The Good Times Gone- The Kinks

Get thee over there right now and download the ZIP file -- you'll be glad you did.

Of course, I bring all this up not strictly out of altruism; long-time readers -- and Sal, who obviously disagrees -- are aware that I consider David Bowie to exist somewhere on a continuum between Most Overrated Figure in Rock History and Satanic Hellspawn Whose Entire Career is a Harbinger of the End Times.

You'll hardly be surprised, then, to learn that I consider Pin Ups to be not only one of the Three All-Time Worst Albums of Rock Covers Ever Made, but also to be among the worst sets of interpretations of any kind of music in the history of recorded sound.

Okay, that last may be an overstatement, but I stand by the Three Worst Covers album thing.

In case you're wondering, the other two are Bryan Ferry's 1973 These Foolish Things and Duran Duran's 1995 Thank You.

The former, I think, is an utterly appaling concept record in which Ferry, nitwit that he is, advances the concept that Bob Dylan's "A Hard Rain's Gonna Fall" has something in common artistically with Lesley Gore's "It's My Party" other than the fact that both were originally recorded by sentient mammals.

The latter, on the other hand, is merely a sloppy mess in which one of the world's most useless bands pays tribute to its non-roots and tries, unsuccessfully, to convince the world that Simon Le Bon has any business performing a Public Enemy song.

Pin Ups, however, I think is exponentially worse. At the time it came out, somebody who hadn't yet heard it (Lester Bangs, actually, who quoted me without attribution in his subsequent review) asked what it sounded like and I replied "Like twelve versions of 'Let's Spend the Night Together' on Aladdin Sane." (At the time, of course, Bowie's "Let's Spend the Night Together" was generally conceded to be the single lamest version of a Stones song evah).

What I would have added, time permitting, is that the entire attitude that Pin Ups exudes (reeks of, might be a more accurate phrase) is a Look at Me I'm Wonderful contempt for the material. The album, IMHO, is the work of a guy who's convinced that these silly little songs and the people who recorded them are ever so trivial and ridiculous, so thank god that he -- The Greatest Star -- is deigning to give them a little undeserved, reflected, acclaim in his trademark bullshit campy ironic way.

Not to mention that the singing is flatout awful; the affectless, emotionless, pretentious pseudo-operatic croon Bowie subjects the songs to is light years removed from the punkish snarl and passion that most of them (with the possible exception of The Mersey's "Sorrow") require.

Have I mentioned that I hate the goddamn album?

Oh well. Your favorite band sucks, and all that stuff, and I understand that where I hear dripping condescension, other reasonable people hear affectionate homage. In the meantime, here's the wonderful original version of the aforementioned "Sorrow." 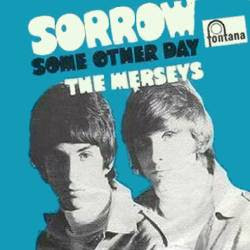 You tell me if Bowie did it justice or not.
Posted by steve simels at 12:09 AM

THAT is a great record.

Well, you and I part company on this one. I've always liked Pinups.

Aynsley Dunbar's drumming. Everything is overplayed, underlined, and generally reduced to sludge.

Gee, steve, don't hold back, tell us what you really think.

(If for nothing else, Bowie should be eternally honored for resuscitating Lou Reed's and Iggy Pop's careers when they were at their nadir.)

Eh, I don't dislike The Thin White Dupe nearly as much as you do - for me, most of his ouevre has just dated badly. But I'm with you on "Pinups" - even back in the day I thought that it sucked whippets. Say, have you ever heard Rush's covers album? Big ole ball of dork-rock fun! - bill buckner

For the record, there's probably close to ten Bowie songs that I either really like or if they came on the radio I wouldn't switch the station.

Plus, he's married to the most beautiful woman in history, so he deserves respect from mere mortal shlubs like myself...

Yep, a very hit-or-miss guy, batting about .265, but occasionally puts one over the scoreboard in right field. Think Frank Howard.

You have to respect that fact that James Brown actually stole a groove from him once.

Okay, I just sampled Bowie's "Sorrow" and "Friday On My Mind" over at iTunes ... they're awful. Forced and emotionless. Like Sinatra's "Duets." :-)

I have mixed feelings about Bowie. I like the obvious songs ("Heroes" and "Rebel, Rebel" are both on my iPod), but hate all the early personae. Now I like the persona but the music leaves me cold.

At least he has good taste in music!

I like a few Bowie songs. I need Heroes.

What I think is strange and peculiar are the people who think you hate Bowie because of his androgyny. That one confuses me no end.

I'm not sure anybody actually meant that seriously, Trey.

Good lord, you should see some of the embarassing pictures of me in bands around the time this came out.
:-)

OK, when you boys are finished arguing amongst yourselves . . . (Actually, it sounds like this particular debate has been going on for many years.) I'm with you on David B. as being ridiculously overrated by people who should know better, but he definitely has his moments. One of the best things about his glam incarnation (aside from the big red boots) was the way he led youngsters (like me, then) back to his influences. When I first got Ziggy-fevered, I knew Iggy but not the VU; The Easybeats but not The Pretty Things. I owe him those discoveries. So there.
-Maude Lange

You guys crack my shit up.

Personally, I see Bowie as a sort of Bob Dylan figure (as I was noting to Kid C in a conversation this morning). People tend to feel strongly one way or the other--they love him or they hate him--but you can't deny his influence.

And steve, unless you're going to acknowledge the Paul Anka cover of "Smells Like Teen Spirit," you're not being intellectually responsible.

Bowie is one of those artists who averages two good songs per album with the rest not shit, just boring. I feel the same way about Talking Heads.

And steve, unless you're going to acknowledge the Paul Anka cover of "Smells Like Teen Spirit," you're not being intellectually responsible

But as I've said on many earlier occasions, I can't tell you how glad I am that my nostalgia isn't Jack Wagner and Styx.

"I'm not sure anybody actually meant that seriously, Trey."

Oh, I knew that Sal was joshing you.

I was talking about this:

August 08, Listening #68 Stereophile: Art Dudley wrote: "Steve Simels, who wrote about pop music for SR, gained my trust by loving the Kinks and Procol Harum, and evidently sharing my disdain for all things My baby done me wrong. Sadly—shamefully, really—when Simels went on to embarrass himself and SR with his hysterical loathing of David Bowie and all things My baby doesn't know if she's a boy or a girl, I missed the opportunity to pause and take stock. Had I done so, I might not have fallen so far behind the curve in realizing that even the most well-informed critics are not only fallible but potentially foolish, and thus spared myself a few years of relative joylessness."

I sent Art an email saying that I had an online friendship with you and that he was clearly mistaken in my estimation and experience. I even mentioned, you know, your book! I got no response.

Later in the Stereophile forums, someone said the same thing about you, dismissing you criticism since you were sexist and I wrote the same material that I did to Art.

I am not trying to stir up anything, really I am confused and would like it if these folks were able to see that they are wrong. But so far, I am making no progress. Not that this ranks up there with world hunger, but I really appreciate Art Dudley's writing, and I see you and him as people with a lot in common, and I hate to see him so mistaken.

I am not trying to stir up anything, really I am confused and would like it if these folks were able to see that they are wrong. But so far, I am making no progress. Not that this ranks up there with world hunger, but I really appreciate Art Dudley's writing, and I see you and him as people with a lot in common, and I hate to see him so mistaken.

Trust me. If they knew Steve, then they'd also know how mistaken they are.

FWIW, The Merseys' version of "Sorrow" is NOT the original, although in all likelihood it's the version that inspired Bowie's version. Before The Merseys did it, it was recorded by The McCoys as the b-side of their remake of "Fever". The original is good, too.

So what are the good cover records?
I would be curious to hear your opinions...

I don't always agree with steve but regarding Bowie I definitely do.