That's Warren Zevon, obviously, with 3/4 of R.E.M. Recorded strictly for fun in 1988 during the sessions for Zevon's underrated Sentimental Hygiene album, but not released until two years later. 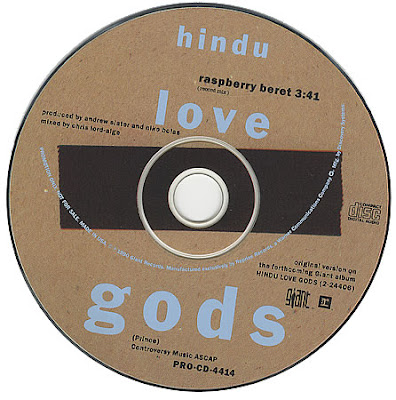 Incidentally, I'm aware that this one isn't particularly obscure, but fact is I just downloaded it for free and I'm feeling insufferably pleased with myself. So I thought I'd share.

In any case, if truth be told, I thought as covers go it was kind of lame, or at the very least disappointing, when it first came out. Now, it strikes me as thoroughly charming...
Posted by steve simels at 7:27 AM

I think it holds up really well too. I remember reading at the time that Zevon wanted to keep the Hindu Love Gods going, at least to the extent of doing a few gigs, but the guys in R.E.M., then at their pinnacle, brushed it off, in kind of "it was a one-off, deal with it" fashion. Well, their big egos got brought down to earth within a few years....

I have always enjoyed this tune too. But then, Mr. Zevon had what it took. What a great rock and roll attitude, and it came through in his delivery. His last record even managed to squeak some out despite his illness and frailty.

I bet you never have to play Werewolves of London in heaven except when you want to.

Makin' polyvinyl chloride in the factory!

Now everybody head on over to warrenzevon.com and sign the petition to get WZ inducted into the R&R HoF.

I mean, I know he's no Madonna or anything, but still ...

My secret authentication word is "folicher," by the way, and I think I'm a little offended. I might have foliched once or twice in college, but I was just experimenting.