Okay, I'm going to go out on a limb with this one, but here's a song that I consider to be not only the last rave-up of the 60s but one of the most exciting.

From late 1969, please enjoy what is, in any case, one of the most outrageous productions ever staged by a rock-and-roll band.

It's the incomparable Easybeats -- well, mostly genius auteurs Harry Vanda and George Young working under the Easybeats moniker -- and their throwaway B-side masterpiece "Woman, You're On My Mind." 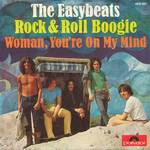 Seriously -- in many ways, this encapsulates the entire history of African-American influenced music in the 20th century into a dazzling four and a half minutes. It starts just to the left of a field-holler, with a one-chord drone of a blues riff and percussion provided by nothing more than the singer's tapping foot. Then, as the instrumentation layers on relentlessly as the song progresses, we wind up at the end with massed chorus vocals and guitars, a roiling sax, a manic rumbling walking bass and crazed drumming, the whole thing sounding for all the world like a cousin of those Sun Ra-influenced collisions of free jazz and heavy metal you hear on the MC5's best stuff (and which eventually mutated into funk and all sorts of interesting post-punk in the 70s and early 80s).

It's an astonishing record is what I'm saying, and all the more so in that it was essentially done as part of a contractual obligation album (and under a writer's pseudonym because of some weirdness with their publisher).
Posted by steve simels at 12:02 AM

This is the real deal!!!

Modern rock bands don't have a clue how to build dynamics like this. This track has never failed to lift my feet and spirits into the upper atmosphere.

This really cooks! Odd that it was not included on the Easybeat's Anthology CD set. Any idea if Stevie Wright is singing on this one? I thought that most of their work in those late days were really just Vanda and Young.

By the way, the A-side is a killer too, with a very fine lean guitar line accenting the awesome backbeat.

Actually, on their last (Friends album (where this actually derives from) I think the only track that Stevie is on is the single, "St. Louis."

And you're write about the A-side. Totally killer as well....