From the summer of 1972, please enjoy perhaps unjustly forgotten NYC proto-glam rock punks The Sidewinders and their surf guitar/raga version of Nicolai Rimsky-Korsakoff's immortal "Theme From The Green Hornet," a/k/a "The Flight of the Bumblebee." 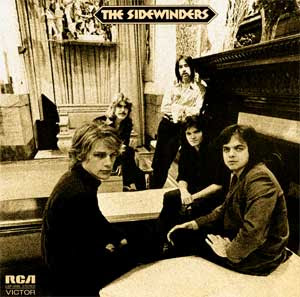 Believe it or not, this is the first album I ever reviewed professionally, in a weekly NYC free paper whose name I can't even remember. I've long since lost the clip, so I have no idea what I said about the record, but having now listened to the entire thing for the first time in decades (it's downloadable over at the invaluable powerpopcriminals) I'm guessing my younger self wasn't particularly impressed. As for the above instrumental, I'd give it a 78; it's got a good beat and you can dance to it.

Incidentally, the reason these guys are even a footnote to rock history is that the album was a) produced by the great Lenny Kaye, of Patti Smith Group fame; b) it featured Andy Paley, who would later collaborate with Brian Wilson and do lots of other interesting stuff; and c) Billy Squier was briefly in the band, although not until after the album was recorded.
Posted by steve simels at 12:01 AM

OK, at first I was thinking the song was lame and how cool it would be to hear it done by someone with the chops to actually play the very difficult part. Then my coffee kicked in and I quit being such a sourpuss.

This is fun. And I love anything approaching surf music.

The rest of the album's pretty blah, I'm afraid.

I actually saw them at Max's Kansas City, now that I think of it. They had a LOT of attitude....

Dave Edmunds comes to mind as someone who should do this tune TMink!

This could be in a Tarantino soundtrack.