I'd Rather Be in Philadelphia

Okay, this isn't exactly news, but one of the nicest things about having the opportunity to vent here on a daily basis is that readers -- people I've never met, for heaven's sake -- frequently are kind enough to turn me on to all sorts of wonderful music I would have otherwise missed; it's no exaggeration to say that much of it has genuinely enriched my life, for which I'm eternally grateful.

But what you're about to hear is...well, words fail me.

The short version: The Kit Kats were a hugely popular live act in the Philadelphia/South Jersey area for several years (roughly from the mid-60s through 1971) and they had a couple of regional hits (the best of which they wrote themselves) before packing it in.

This one -- "That's the Way" -- came out in early 1966. It's a turbo-charged Phil Spector-influenced production mounted at a breakneck speed, with a punk don't-tread-on-me attitude in the lyrics, but it also has a soulful yet otherworldly quality quite unlike anything I've ever encountered. Listen to it and be changed. 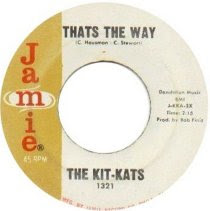 Seriously -- at a breathless two minutes and fifteen seconds, that's as concise, exciting and musically sophisticated a record as could be heard in pop music's annis mirabilis, and I can't believe that I had to wait four decades to encounter it.

This one from three years later-- "Won't Find Better (Than Me)" (like it's predecessor, self-penned) -- is also a head turner, if not quite as viscerally overwhelming. It's a remake of the b-side of "That's the Way" (with the band briefly billed as The New Hope) and it was all over the radio in Philly in the winter of '69 and early '70. 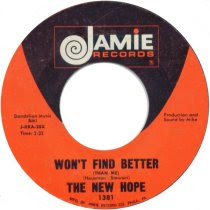 I think you'll agree that a very young Bruce Springsteen must have been listening very, very hard to it on his car radio that season; in fact, just about every piano idea on his first three albums sounds to me like it was derived from the first half of the record. And the second half, where you can hear the band copping to their doo-wop roots, is merely gorgeous.

For more on the Kit Kats history, check out this terrific career retrospective; it's an amazing story on a number of levels.

And speaking of amazing, more or less their complete recorded outfit has been lovingly restored and remixed on a two CD set (with video) that you can still get over at Amazon here. 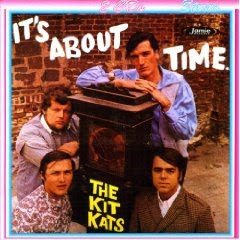 Oh -- and a coveted PowerPop No-Prize in Excelsis goes out to reader William Keen, who thought I might dig this stuff and kindly sent me the audio clips. Dig, of course, doesn't quite get it; the first time I listened to "That's the Way" I felt like somebody had just smacked me upside the head with a 2 X 4.
Posted by steve simels at 12:01 AM

Wow! Sometimes a band is just too good for their own good.

Wait til you experience "Let's Get Lost on a Country Road" by the Kit Kats, another truly jaw-dropping piece of pop rock. It was actually a hit in Winston-Salem when we were kids!

I was going to post "Let's Get Lost" as part of the above but I figured it would have been overkill.

But yes, it's jaw dropping as well. Just an amazing band, and I still can't believe I never heard of them (or heard them) until last week.

Kewl! (Had never heard of these august gentlemen, either...) It rocks.

In related waaay-under-the-radar news: At the Texas Tornados set in NYC the other night, one of the guitar players was introduced as Louie Ortega. Name ringed a vague bell - turns out he was the titular leader of "Louie & The Lovers" - a Texas band that had one Doug Sahm-produced album in 1970. I had the LP at one point, and remember it as an overlooked gem: power pop meets Los Lobos, well before Lobos existed. I have learned that Louie's collective ouvre is to be re-issued by Bear Family next month. Whoo hoo! (I'll let you know if it holds up...) - bill buckner

Bill -- I vaguely recall those guys as being quite good.

Wow, those chorus vocals are very Spanky & Our Gang, with a big dollop of streetwise soul added.

And I hear The Association.

I actually hear another Pennsylvania group -- The Vogues, as in "Five O'Clock World." The weirdly beautiful not really a falsetto...

These guys played their own instruments, however. The drummer was a mosnter, and so was the keyboard guy as you can hear from that second cut...

Those tracks were great!

Did the keyboard player give lessons to both Roy Bittan and Billy Joel?

MBowen said...
Those tracks were great!

Did the keyboard player give lessons to both Roy Bittan and Billy Joel?

You noticed. The flourishes that later showed up at the end of Jungleland, for example, just blew my tiny mind.

Was "That's The Way" written by Whitney Houston's mom? It is credited to a C. Houston, and has a gospel feeling. Not a bad song, and would definitely fit on a Spanky and Our Gang album.

I've just been compulsively playing these over and over. Their version of Sea of Love kicks my ass, and I don't even like that song.

every song on the album is a gem of an artifact of those lazy, hazy, crazy days down the jersey shore in the 60's. "that's the way" is as exhilariting as a ride on the wild mouse on the wildwood boardwalk.

Hey, Steve: When I was listening to the two-and-a-half minutes of that Piano-Tinkling Prelude™ in The New Hope's "Won't Find better (Than Me)", I heard a little something in addition to its overwhelming Springsteen-ness. I also heard a bit of Aaron Copland in there (from 1:21 to 1:25). The piano-playin' dude used some very Copland harmonies.

Oh, and speaking of the Piano-Tinkling Prelude™: According to Discogs, the single of The New Hope's "Won't Find Better (Than Me)" runs for 2:32, which is borne out on this YouTube post of the single.

This leads me to today's puzzler: where did that two-and-a-half-minutes of piano come from if it isn't on the official single release?

A and B sides? Other than that, I have no idea.

Incidentally, What you heard is the remastered and remixed version from the recent CD box set (the stereo mixes and the audio restoration are by Thom Moulton, who did a lot of Procol Harum stuff more famously)