Okay, let me simply say -- without a hint of snark or irony -- that this one is a masterpiece.

And by masterpiece, I mean one of the greatest short orchestral and vocal compositions written and recorded in any musical genre in the second half of the 20th century. As in this should be performed by large symphonic ensembles everywhere as part of the classical repertoire. 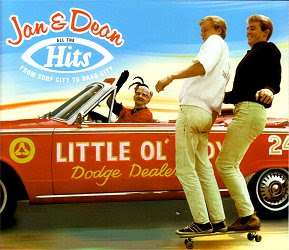 This is, obviously, the apotheosis of what we think of us as the L.A. Surf sound, an everything but the kitchen sink production -- harpsichord, kettle drums, oboes and a Bach chorale on a rock record?-- approaching the level of mad genius. Seriously, Brian Wilson may have been a better songwriter than Jan [Berry], but nothing the Beach Boys -- or anybody else at the time, including The Beatles and Phil Spector --were doing in the studio approaches the sheer audacious Ivesian majesty of this. Not to mention it's hilariously funny as well.

Michael Tilson-Thomas, if you're out there, act now.
Posted by steve simels at 12:05 AM

As the 45 of "Ride the Wild Surf" was in heavy rotation on my Westinghouse record player, I'm more than familiar with "Azuza, too." I'm a sucker for these kind of uber-produced songs (I think I've mentioned my fondness for Danny Hutton's version of "Funny How Love Can Be").

As a thank you, here's Curt Boettcher's demo for "Along Comes Mary." What an amazing voice: http://www.youtube.com/watch?v=G7WPW-CMMfU I'm a big fan of his "There's an Innocent Face" LP.

Looks like somebody beat you and Tilson-Thomas to it.

This has always been a favorite for me. Imagine the Swingle Singers doing surf music!

I was in radio back in those days, and as i recall it, in my little town, "the little ol' lady" was the more popular side...

And you don't come back from Deadman's curve!

I've used this a few times on mixes. The way the line "the little old ladies wait in wild anticipation for the meeting of the double-A C ASSN" is perfect.

But then, what isn't.

Speaking from experience, "Wipeout" is better at 78 RPM!

Unfortunately, my high school buddy and I played it one too many times in a row and his brother burst into my friend's bedroom, ripped the single off the record player and smashed it before our eyes.