Okay, this is a really long story, so please indulge me.

In any case, the record itself is one of the landmarks of the Glam Era -- a perfect three chord "Sweet Jane" derivative with hilarious topical lyrics, gorgeous layered electric and accoustic guitars, and absolutely brilliant production, including a bass guitar and cowbell breakdown (a la the bit in Free's "Alright Now," but hookier) that sets up a massive series of final choruses that once heard are etched into your auditory canal forever. An absolute masterpiece, is what I'm saying. Unfortunately, it was not a hit when released in 1973 (I had a promo copy on Capitol at the time, but I lost it later in the decade) and it has never been on LP or CD. An inferior demo version was on a MHRB compilation in the 90s, but it lacked the gorgeousness of the original.

You can read a contemporary account of the single -- from the now defunct house organ of United Artists Records -- over here. Incidentally, the author of said piece, Martin Cerf, was one of the hipper record company guys at the time, and a friend to numerous rock journalists of the period including the late great Greg Shaw; he may, in fact, have been a partner in Greg's BOMP Records, although I'm hazy on that.

Anyway, take a minute to listen to it, and then we'll resume our convoluted narrative. 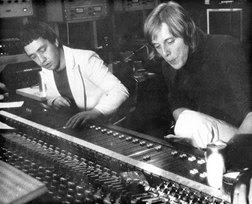 The bottom line is I'd been searching, in vain, for a copy of the thing for close to thirty years; in fact, I had more or less convinced myself that the damn record existed only in some sort of fever dream I'd had once. Imagine my surprise, then, when I finally, last week, got an mp3 of "Natural Man" (exactly as I remembered it) from the estimable Robin Wills, who does business over at the wonderful purepop blog. Apart from running said site, Robin is/was guitarist and songwriter with The Barracudas, a terrific Brit-based band from the legendary class of 1978 (you might recall their 1980 hit "Summer Fun"). Before we go any further, please click the purepop link and check out the place -- it'll be worth your time, and I'm not saying that just because the design has a certain air of familiarity.

Seriously -- get over there now.

Anyway, Robin and I started swapping other rare tracks ("I am always looking for obscure US bubblegum and stuff" he told me) and finally, just to be a wiseguy, I sent him an mp3 of "On the Road" by The Hounds, i.e. the B-side of my 70s band's DIY single, of which a total of 1000 copies were ever pressed and only 800 or so, to my knowledge, were ever actually sold. (In another amusing irony, some of those were distributed overseas by the aforementioned Greg Shaw).

At which point he e-mailed me back the following...

Hi Steve: Believe it or not I have The Hounds single!!!!...I thought that the B side was a good Roy Loney era Groovies type number. I got it in a swap with a guy from NY

...and I damn near fainted. Talk about the smallest world in the world.

Anyway, here's the B-side in question, transferred from the original vinyl at great personal expense by moi as part of the 2009 Hounds CD Reissue Project. Actually I think it sounds more like Dave Edmunds than the Groovies; in fact, those Chuck Berry leads are my poor attempt at recreating Dave's work on the live version of "Let It Rock" (with Brinsley Schwarz) on the great Subtle as a Flying Mallet album. But you tell me. 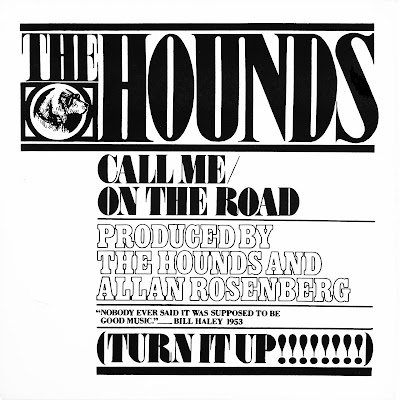 Look, I told you it was a long story. I made no claims that it was an interesting one...
Posted by steve simels at 7:39 AM

Cerf ain't that common a name, Steven. Is that guy kin to Christopher and the estimable game-show wit Bennet?

Could be, although if it was the case I never heard anybody say so at the time.

Note to self: Obscure Australian 70s rockers and shameless self-aggandizement less popular with readers than expected.
:-)

Was this the same Hounds that were signed to Columbia and had one LP?

KC -- Nah. Different Hounds, and god knows we were pissed when they actually came out with a major label album, for obvious reasons.

Oh, good! 'cos those Hounds were Godawful!

Absolutely. Seriously -- we were pissed that they had sullied our good name.
:-)

Wow - Phonograph Record Magazine! I'd forgotten about that!

Wonder if the name's up for grabs?

That Hounds tune is a nice pub rocker! Glad to hear it!

Great Typography on the sleeve. Who did it? Did he or she ever work for Herb Lubalin?