Weekend Listomania (Special Where the Hell is My Jet Pack? Edition)

Well, it's Friday and you know what that means. Yes, my Oriental boinkstress Technicolor Consultant Fah Lo Suee and I are off to Massachusetts, where we hope to confront Congressman Barney Frank about why he wants to send all his gay Jewish relatives to Obama's FEMA death camps.

Well, not really, but I want to see if I can get a date with that little pixie-ish chick who was asking him about that stuff at the townhall meeting this week. Wotta cutie!!!

Most Memorable Post-Elvis Song or Record Referencing Some Form of Science or Technology in the Title or Lyrics!!!

No arbitrary rules this time, you're welcome very much.

Seriously -- no arbitrary rules. The thing is fricking self-explanatory. And in case I've done a list like this one already, I'm sorry if I couldn't find it in the archives, but the fact is I'm senile AND tech illiterate.

And my totally top of my heard Top Six is: 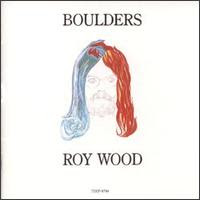 A brilliant conceit -- a computer falls in love with its programmer -- rendered as a perfect short story masquerading as a song. I hate to bring up a word like "art" this early in our discussion, but it's really unavoidable.

5. The Kinks -- Last of the Steam Powered Trains

One of my favorite songs from the Village Green album, and not just because it's so obviously blues-based (stolen from "Smokestack Lightning") and thus, ironically, so un Village Green-y in the pastoral English sense. I'd never seen this clip before, BTW, but it's got to be one of the very last things of its kind featuring the Kinks original lineup.

A live version of the Sun Ra tune originally covered on the Q's very first (1969) album. Hawkwind probably kicked themselves they didn't get the idea first.

Proving once again that no matter what the Listomania theme du jour, we can always find a way to sneak Billy Corgan's pretentious cueball noggin into the mix. 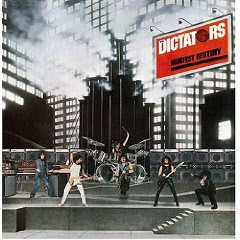 Okay, this one's a reach, but what the heck, it totally rocks.

And the numero uno she-blinded-me-with-science tune, I can prove it with cold mathematical logic, obviously is -- 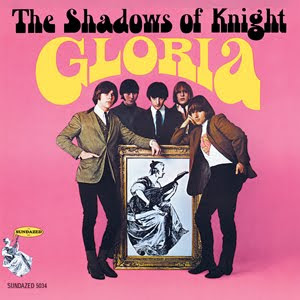 I seem to recall this as the b-side to "Gloria," although my brief Google search has been unavailing on that issue. It's one of their best Yardbirds rip-offs in any case.

[Shameless Blogwhore: My parallel Cinema Listomania -- theme: Most Memorable Big Screen Period Piece Set in the Second Half of the 20th Century -- is now up over at Box Office. As always, if you could find it in your heart to go over there and leave some sort of snarky comment about my hopeless inadequacy as a film critic, I'd be your best friend for life. Thanks!]
Posted by steve simels at 12:01 AM

Oh good, I'm first and can grab the easy ones off the top of the head.

And that Hey Mr. Spaceman song.

I'm sure you smart people can remember who did them. I can't at this hour of the morning. Think the first one was Elton John.

Early yet, but a couple pop into my mind:

Leaving on a Jet Plane - PP&M

Welcome to the Machine - Pink Floyd

Hanging on the Telephone - Blondie


If by broadly you mean confusing Junior Walker and Junior Wells on "Shotgun," I'd have to agree.
:-)

Guided By Voices -- I Am a Scientist

Are y'all blinded to Dolby?

"Ladytron"--Roxy Music
"Deeper Understanding" -- Kate Bush ("I turn to my computer like a friend")
"The Scientist Writes a Letter"--Tom Verlaine
"I Dream of Wires" --Robert Palmer
"Tesla Girls" -- OMD
"Techknowledgy" -- Utah Saints w. Iggy Pop
And Steve, no "Machines" by Lothar & the HandPeople?

If by broadly you mean confusing Junior Walker and Junior Wells on "Shotgun," I'd have to agree.
:-)

And stop taking pictures of me with your youtubes!!

David said...
"
And Steve, no "Machines" by Lothar & the HandPeople?

I figured two weeks in a row might be a bit much...

Almost anything by Kraftwerk.

"Money For Nothing" - Dire Straits

"Back in the USSR" - Beatles

"You Can't Catch Me" - Chuck Berry. Okay, maybe it's not post-Elvis, but i don't care. With lyrics like this, it deserves an honorable mention:

I bought a brand-new air-mobile
It custom-made, 'twas a Flight De Ville
With a pow'ful motor and some hideaway wings
Push in on the button and you can hear her sing

Couple of obligatory Who / Pete Townshend ones (all I have time for this morning):

Relay, one of the songs from the aborted "Lifehouse" project that was not included on "Who's Next": "they all get carried on the relay" is a reference to the proto-Internet that Townshend envisioned. Probably about as funky as the Who ever got; the song does work up a groove.

Greyhound Girl, an incredibly lovely song from Lifehouse that to my knowledge was never recorded by the full Who; another reference to the "experience suits" that Townshend dreamed up for Lifehouse. Pete played this one live in La Jolla in 2001 on a 12-string guitar.

Goin's Mobile, the Who, from Who's Next - "make the toast and tea, play the tape machine when I'm mobile"

Correction: the lyric from Goin' Mobile is reversed, should be "play the tape machine, make the toast and tea when I'm mobile".

Hey, Steve. Were you referencing this band in the title of this post?

I'm indifferent to their music, but I love the name.

Future, from Todd Rundgren's Liars album (unjustly overlooked, it continues to bug me, great record) references the flying cars we should all have by now, but unfortunately, not jetpacks. "I remember...the world of tomorrow..."

And Donald Fagen's solo stuff is loaded with interesting scientific bits; like the steam-powered ten-cylinder car of the future, the Kamakiriad (with optional hydroponic garden). "I.G.Y" predicted "90 minutes from New York to Paris" - undersea by rail...and "a just machine to make big decisions, programmed by fellows with compassion and vision". Imagine how that would have worked out. Hint: President Gore!

Bob Pollard -- Artificial Light (or more obvious, I Am A Scientist)

Gary Numan or Robert Palmer -- I Dream of Wires

The first song that popped into my mind is "Wonderful World" ("Don't know much about...")

This Beat Is Technotronic: http://www.youtube.com/watch?v=pcrsRAx3Oxc

If the above entry isn't inspired enough for this tough crowd, I'm sure we can all get behind "50 Ways to Love Your Lever" http://mrbongo.uh-hosting.co.uk/50ways/

ps - heartwarming to see NRBQ in the list this week. Where have you gone, Joe Spaminato?

"Mayor of Simpleton" by XTC ("the home computer has me on the run...")

"Reconstruction Site" by the Weakerthans ("... buy me a shiny new machine that runs on lies and gasoline...")

A few more from the collection:

Balloon Farm - "A Question of Temperature"

Neutral Milk Hotel - "In The Aeroplane Over The Sea"

The Only Ones - "Another Girl, Another Planet"

XTC - "Another Satellite" from Skylarking

Also Aimee Mann's Satellite from her "Bachelor No. 2" disc.

Some Warren Zevon: pretty much all of the "Transverse City" disc, especially Run Straight Down with the memorable line "except the robots at the dynamo." And the title track's got some science cred too: "down among the dancing quanta / everything exists at once / up above in Transverse City / every weekend lasts for months..."

Another one I just thought of: "Why Does the Sun Shine? (The Sun is a Mass of Incandescent Gas)" as covered (and made into a rave-up) by They Might Be Giants.

Sparks - Talent is an Asset (it's about Einstein, for chrissakes!)

Curious shopper: How far will this intergalactic laxative get me?

Donovan: From here to Mars.

Answering Machine by the Replacements.