Another Christmas Gift For You (In March -- I Know, I Know) 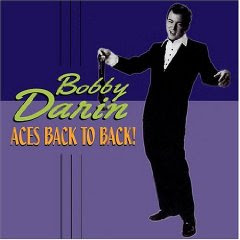 So after that Buddy Holly clip I posted last week, I found my thoughts turning -- not altogether inexplicably -- to another revelatory 50s track by another seminal artist.

I'm a huge Bobby Darin fan; I don't have the time today to really get into the reasons, but it is, I think, a goddamn shame that Kevin Spacey 's Darin bio-pic of a few years ago sucked so badly. Let's just say that Bobby was among other things a terrific songwriter, a wonderfully expressive singer, and as a performer the missing link between Frank Sinatra and Elvis Presley and leave it at that.

In any case, here's something that just jumped off the grooves of Aces Back to Back!, an otherwise spotty collection of Darin obscurities released in 2004: The original, stripped down and unadorned demo, from 1959, of the man's classic ballad "Dream Lover." Totally devoid of the gloopy strings and annoying yeh-yeh girls on the familiar hit version -- just two minutes or so of sheer romantic longing, heartbreakingly sung. Essentially, it's a 50s version of MTV Unplugged.

Anyway, you can download it here. As before, if the authorization has expired by the time you get to it, e-mail me and I'll send you the mp3.
Posted by steve simels at 8:24 AM

Loved him ... was very upset when he died.

That was gorgeous--a million times better than the "official" version.

I've always appreciated Darin's voice, but the whole Vegas schtick (followed by the folkie-hippy thing, as earnest as it may have been) was a big turnoff for me. Still, a lot of people I respect--yourself included--claim he's the toppermost of the poppermost, so what the hell do I know?

Bobby Darin not as beloved as I might have thought.
:-)