Death May Be Your Santa Claus

In case you didn't see it, there was an interesting obscure-rock-band-finally-getting-its-due story in the New York Times on Sunday; the kicker is that they were an African-American hardrock/protopunk trio in Detroit about a decade before such a thing would be fashionable.

ON an evening in late February at a club here called the Monkey House, there was a family reunion of sorts. As the band Rough Francis roared through a set of anthemic punk rock, Bobby Hackney leaned against the bar and beamed. Three of his sons — Bobby Jr., Julian and Urian — are in Rough Francis, but his smile wasn’t just about parental pride. It was about authorship too. Most of the songs Rough Francis played were written by Bobby Sr. and his brothers David and Dannis during their days in the mid-1970s as a Detroit power trio called Death. 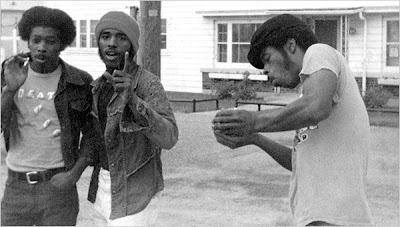 The group’s music has been almost completely unheard since the band stopped performing more than three decades ago. But after all the years of silence, Death’s moment has finally arrived. It comes, however, nearly a decade too late for its founder and leader, David Hackney, who died of lung cancer in 2000. “David was convinced more than any of us that we were doing something totally revolutionary,” said Bobby Sr., 52.

Forgotten except by the most fervent punk rock record collectors — the band’s self-released 1976 single recently traded hands for the equivalent of $800 — Death would likely have remained lost in obscurity if not for the discovery last year of a 1974 demo tape in Bobby Sr.’s attic. Released last month by Drag City Records as “... For the Whole World to See,” Death’s newly unearthed recordings reveal a remarkable missing link between the high-energy hard rock of Detroit bands like the Stooges and MC5 from the late 1960s and early ’70s and the high-velocity assault of punk from its breakthrough years of 1976 and ’77...

This is a terrific story, the more so because it has a happy (if somewhat bittersweet) ending, and you can read the rest of it here.

And in case you were wondering, you can download the A-side of that 800 buck single here. I'm haven't quite made my mind up what I think of it, but as per usual, if the authorization expires before you get to it, e-mail me and I'll be happy to send you the mp3.
Posted by steve simels at 12:13 AM

Great story Steve. I swear I was gonna post it as ms. rosa hipped me to it on Facebook. Sounds to me like they fit right in with MC5, Stooges, et al.

Thanks for the downloads. I like this one a lot.

The local record shop was playing this and at first I thought it was some obscure Thin Lizzy I'd never heard. Then I thought maybe it was the best Bad Brains I'd never heard. Really extraordinary sound regardless of time or place. Highly recommended listening!

Have you heard the rest of the album? Should I invest?

I have it on vinyl and yes *for me* it's very worth it, hype be damned. Be forewarned I tend to like the heavy ended rock and rolls. It is a short record, only seven songs, so there's that, too. OH and the cover art is AWFUL. But the production is terrific - reminds me (sweartogod) of The Flaming Groovies sound. And the songs are single-worthy. Take a chance, you'll be glad you did!

Great stuff and, man, did they wear their influences well ... the chord progression on the chorus is the same one Iggy later gave Bowie for the chorus of China Girl.

And that bass player drives that song like a 10-year vet. I asked around today among my Detroit colleagues to see if anyone heard them back then, but came up empty. Nice tonic, though, to the awful news that Nugent is going to attempt an Amboy Dukes reunion.