Fun With Downloads: Special Tales From the Crypt Edition

Take a moment to download it here, won't you?

And now, from the November 1992 issue of The Magazine Formerly Known as Stereo Review, here's the backstory.

NOISE IN THE ATTIC 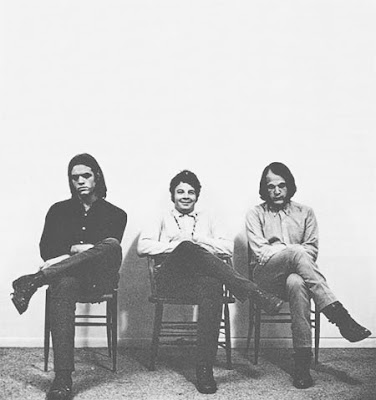 A couple of brief notes by way of a postscript:

Also, since I wrote the piece, Arable Land has emerged on CD in stereo (despite Barthelme's mono-only claim); improved sonics notwithstanding, I hasten to add that it retains its period charm, and you can order it at Amazon if the downloadable song above piqued your curiosity. I really like it, myself.

Finally, some time in the 90s, somebody put out an actual, quite well-recorded, live album of the Crayola's 1967 appearance at the Berkeley Folk Festival, featuring the aforementioned melting block of ice. I had a copy briefly and seem to recall it's actually a double CD; you can order it here if you have a little disposable income and a fondness for acid-infused Dada-ish art gestures.
Posted by steve simels at 12:00 AM

Hey, this is a fascinating and neglected area of the rock firmament; thanks for exploring it. God, Kevin Nealon huh? These days it's less notable if a celeb had been in a band of some note, but in the '60s it definitely feels much more arcane. Did you know that Mayo Thompson produced the sublime Chills album "Brave Words"? People complained about the mix, but it is just a fantastic collection of songs from this sadly short-lived NZ band. I would be happy to send you a few tracks if you'd like to take a listen.

David -- You're right, these days it would be unusual if a celebrity DIDN'T have a band in his past. When I wrote the piece, though, it was intriguing.

I'm trying to think of some of the other people I interviewed.

I know I talked to Bobcat Goldthwaite...also, John LeBoutillier III, a crazy wingnut who briefly got elected to Congress in 1980 as part of the Reagan revolution.

And I'm not familiar with Chills, I'm afraid. Love to hear them, though...

I dunno. You bust on other writers for championing crap music*, and yet you refer to "Hurricane Fighter Plane" as a 'classic'?

Possibly you're joking. If so, haha.

Otherwise, huh? It suggests the sound of a pile driver heard through a window at Abu Graib after it was moved to the bottom of the ocean.

*Bonus! WaPo's David Malitz on Morrisey's recent DC mope-show: The best moments...showcased a vitality that most veteran performers can only dream of.

Yes, whenever I think of Morrisey, I think: Vitality!

I was being ironic, but not completely.

"the sound of a pile driver heard through a window at Abu Graib after it was moved to the bottom of the ocean."
There are many different takes on noisy lo-fi production...to some it's unlistenable, other people dig the rawness. The dirty production doesn't impede the enjoyment of this listener, and compared to the proliferation of post-My Bloody Valentine-style distortion, its even rather quaint.

I was being ironic, but not completely.

David, indeed, it's all subjective. I apologize to Rush Limbaugh.