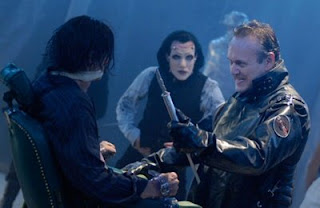 This weekend, the teen made me sit down to watch Repo!: The Genetic Opera, a fascinating and sometimes gruesome blend of music, mayhem, comic-book violence, and family melodrama.

Repo! is the story of a future world where organ transplants are everyday matters, but if you can't pay, then a representative from Geneco (that's 2 syllables, not 3), will come and reclaim the unpaid merchandise, killing the recipient in a bloody mess. The whole thing is framed around a seventeen-year-old love triangle, in which a young woman walks away from her wealthy lover to marry a young doctor...oh, this is too complicated. Here's the blurb:

A half-century from now, humanity has been decimated by a plague and gone surgery-mad, with desperate survivors buying replacement internal organs from the GeneCo on credit and scalpel-wielding repo men chasing down deadbeats to reclaim the company’s transplants. Two interlocking family dramas are played out amid the murky clutter of exploitable bodies. A brooding Sweeney Todd type (Anthony Stewart Head) does GeneCo’s bloody business in order to provide medicine for his sickly goth-girl daughter. Meanwhile, the unscrupulous plutocratic head of GeneCo (Paul Sorvino) attempts to rule his spiritually or physically degenerate offspring—among them Paris Hilton.

Sorvino (Goodfellas) and Head (Buffy the Vampire Slayer) leave more chewed scenery in their wake than the Tasmanian Devil, but despite the over-the-top gruesomeness of the film, it's good fun.

A scant six months old, it's apparently already a cult classic, complete with the requisite becostumed midnight showings, most recently in Seattle (where the teen's partner traveled this weekend to attend).

Oh, I see it's now available on DVD. Guess I know what someone's getting from the Easter Bunny.
Posted by NYMary at 9:32 AM

Thanks for the recommendation. as the proud parent of an 18-year-old, I appreciate staying on top of this stuff. My apologies for the shameless blogwhoring (say hi to Steve for me!), but I thought you might get a kick out of the response I got when I punched this movie into my Netflix queue!