The Remnants of Dignity

A slightly melancholy postscript to the Searchers album item downstairs:

My 80s skinny tie band absolutely adored those guys; when we first got together in '79, the basic template for what we were doing was "It's Too Late," the glorious single from that comeback album, and we covered both it and the other classic track, The Records-penned "Hearts in Her Eyes," which we used to open our sets with for years. People on the Village club circuit we frequented basically thought we wrote it; we were "That band who does 'Hearts in Her Eyes'."

Both of those songs, incidentally, and lots of other gorgeous ones including what I think is the best-ever version of John Fogerty's "Almost Saturday Night," can be found on on the CD below, which includes the first LP and the 1980 followup Love's Melodies. 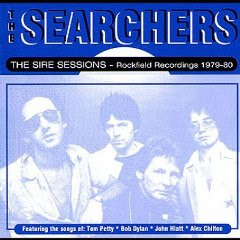 Anyway, the Searchers finally showed up at a club on Bleecker Street in '83 or 84; it was their first American performances since the early 70s (I think they had done a British Invasion nostalgia show at the Garden) and it was our first chance to see our heros in person. We were stoked, obviously, and we crammed into the place along with lots of other musician friends (including members of the Smithereens), anticipation running high.

Short version: They had become what the Brits call a cabaret act; they did shortened medleys of their hits, covered some then-current lame Top 40 crap, told a lot of dumb family friendly jokes, and generally carried on like they were the opening band at Tommy's Holiday Camp. We got more and more depressed as the evening wore on, and finally I called out for "It's Too Late" and "Hearts in Her Eyes" at which point lead singer Mike Pender stopped for a second, had a mumbled conversation with the rest of the group, and then looked at me with a sad expression and said "Sorry mate. We've never actually played either of those live."

Anyway, you can download their gorgeous version of "Hearts in Her Eyes" here. As always, if the authorization expires before you get to it, just e-mail me and I'll pass the mp3 along to you.
Posted by steve simels at 3:39 PM

Hah, they played a club in Cambridge Square in Boston right around that time and I was always bummed that I didn't make that show. Guess I needn't have worried.

The really sad thing was that musically they were impeccable. Sounded great, when they were clowning around or doing 30 second snippets of their hits.

Sad that they felt the need to do that ... I guess everyone can't be Scott Walker! :-)

The Searchers are still around and touring the UK at the moment! Incidentally they occasionally do Hearts In Her Eyes live in their solo shows!!!!!!!

I'm glad to hear that on both counts.

Oh,Stevie Ray,they were a wee bit...slick,but,they sang and played very well.And,I guess they felt,rightly so,that the vast majority of the audience was there to hear the hits.The conundrum ,of course,is, had they played their then new tunes would the LP have done better? Or,if the LP had done better,would they have played the new tunes? WE'LL NEVER KNOW ! I'll ponder this as I leaf through the newspaper that doubles as my bedding,as I keep looking for work.

Actually The Searchers were perfoming loads of tracks from the Sire albums from 79 to 83.

So can't understand the comment, I actually a live cd recorded from miker desk from a tour of US in 83 and they did a high % of numbers from the sire era. They were in a dilemma though, they were making their living in cabaret and playing the Sire tracks but the audiences were not interested.