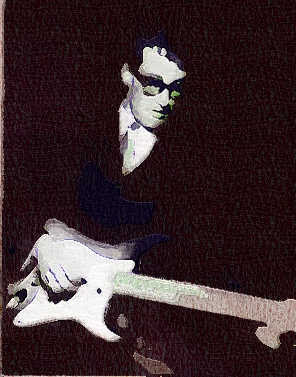 Okay, I've finally got the chance to share one of my all-time favorite songs with you guys -- one that I've been looking for with a total lack of success for years.

But first, the backstory.

In 1958, first generation rock god Buddy Holly and his young bride Maria Elena left the provincial climes of Lubbock, TX and moved to sinful Greenwich Village in New York City. They promptly set up a hepster pad at the brand new luxury high rise The Brevoort, on the corner of 9th street and Fifth Avenue (the building's still there, by the way, and looks, now as then, like this). 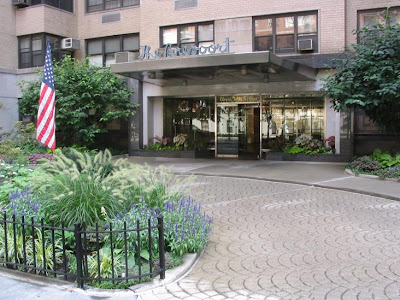 Buddy had a professional Ampex tape machine in the apartment (a gift, I believe, from his music publisher, for whom Maria Elena had worked as a secretary before they met) and throughout '58, with just an acoustic guitar, he taped a number of songs, some as publishing demos, some just for his own amusement, all in mono. One of them was a stripped down version of Little Richard's fiery rocker "Slippin' and Slidin'", to which Buddy appended the cool guitar riff from the Everly Brothers' "Bird Dog."

Anyway, about five years after Buddy's death, his producer Norman Petty overdubbed new stereo backing tracks by studio musicians on a bunch of the apartment tapes at his studio back in Lubbock. Some of the resulting tracks are fun (a very nice "Peggy Sue Got Married") and some are less so, and most of them have appeared on various LPs and CDs over the years (I first heard them on a two-disc Holly Greatest Hits collection in the early 70s). But "Slippin' and Slidin'" has never been on CD, which I consider a cultural crime. Greil Marcus rightly described it as sounding like Buddy if he'd been been backed by The Band in their days as The Hawks; I think that's exactly right, and all the more surprising in that the musicians are actually The Fireballs, the guys behind the (I've always thought) rather lame hit "Sugar Shack." In any case, Buddy's vocal is a marvel -- sly, sexy and oozing fun and youthful excitement -- and I'm beside myself to finally have a digital version. [A Tip of the Hatlo Hat to our pal Sal Nunziato, who found it -- transferred from vinyl, apparently -- on some clandestine internet site and passed it along.]

Anyway, I think it's one of the coolest rock tracks ever, and I hope you enjoy it as much as I do. You can download it here. If the authorization has expired by the time you click on it, e-mail me and I'll send you the mp3.
Posted by steve simels at 12:02 AM

Yes! Great to hear this again, and with the additions. But tell me. Was there another take reissued on one of the many best-of LPs released in the wake of "The Buddy Holly Story." I remember a slightly more slurred vocal and no stops. But, then, the last time I heard it was in the Pitkin County Library in Western Colorado during the early years of the Carter administration. I remember weeping.

man, how I love Christmas in March ... you know, the word "cool" has been pretty much destroyed forever as a way of describing anything well, but, if it ever meant anything, it's this track.

I haven't had a chance to check, but if memory serves there is another "Slippin' and Slidin'", a rather more conventional version, possibly with the Crickets.

I do know that the apartment tape version minus the overdubs is available on CD. When I get a chance I'll track down the other one.

I just got the new TSOOL, Communion. It's a 2 CD set. Sounds pretty good.

Thanks so much for this -- and for the back story complete with cool photo!

steve, the amazing fan internet label Purple Chick has 'released' a 10-CD Buddy Holly collection that supposedly has every sneeze, burp & fart by Buddy that was never officially released. If so, these apt. recordings should be on them. I will try to locate them for you.

I always wanted to live in the Brevoort ... now I can add yet another reason to my list.

That's great. Not only can't I get the song, but now "Sugar Shack" has been running through my head for the past half hour.

You know -- it just dawned on me...somebody in that building lives in Buddy Holly's old apartment. I wonder if they know...

I'm familiar with the track from the 10 CD set (More Buddy Holly then even I want to hear!). It was one of the standouts from this overwhelming set. Great choice.