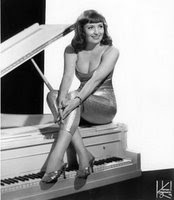 Alert readers may recall that back in January of last year, we sang the praises of the obviously babelonian Linda Laurie, auteur of the novelty hit "Ambrose Pt. 5." "Ambrose," of course, is a haunting tale of the tender love between a boy, a girl and a subway that permanently warped my childhood.

At the time, we chatted with the elusive chanteuse, who assured us that she would have an official website up at any moment. Alas, as of this writing, it has not materialized, but in any case, proving once again that YouTube is the single greatest development in the history of Western Civilization if not the universe, here she is as a contestant on the long-running TV game show To Tell the Truth, from February 10, 1959. She's the one on the left -- pretty cute, no?

If you've never actually heard "Ambrose Pt. 5," you can download it here. As always, if the authorization has expired by the time you get to it, just e-mail me and I'll send you the mp3. Be warned, however, that once you experience the song you may be changed in unfathomable ways.

Incidentally, the Peter Tripp panelist Marge Champion asks the contestants about in the clip was a then-famous DJ for WMGM-AM in New York City, who had recently stayed awake on the air, as a stunt for the March of Dimes, for an astounding 201 consecutive hours. I vividly remember listening to Tripp's broadcasts during that period on a crystal set I had in my bedroom (I don't think transistor portables had come into wide use at the time) and I also remember, with much fondness, that toward the end the poor SOB was obviously hallucinating. Actually, to this day, I think it's the coolest thing I ever heard on the radio.
Posted by steve simels at 12:05 AM

That was pretty freaky, Steve. Never heard it before, but I think it could have been the inspiration for the Beatles' "You Know My Name."

Btw, I read elsewhere on the Internets where Ms. Laurie claimed that the young lady sitting on the piano was not, in fact, her. Don't know why she would deny being such a dish, but there you have it.

Far as I can tell, the woman on the piano and the girl in the clip are one and the same.

Both are adorable, obviously...