Fun With Downloads: Special You Gotta Have Friends Edition

Wow -- here's one I've been looking for a CD version of since forever. Or at least since 1968, when I first saw the LP cover staring out at me from a bin at the Sam Goody in Paramus, N.J. and decided -- you know, I think I'll buy the new Creedence album instead. 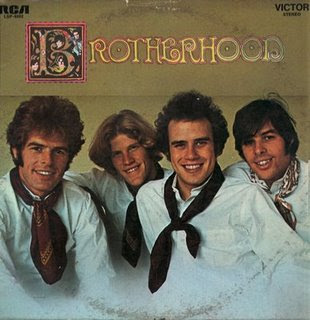 If some of those guys in the cover photo look familiar, that's because they're three fifths of the original hit-making Paul Revere & the Raiders, specifically (l to r) drummer Mike "Smitty" Smith, guitarist Drake Levin, and bassist Phil "Fang" Volk (the unfamiliar blonde guy is keyboardist Ron Collins, of whom history has left no mention that I can find). As the Brotherhood, they put out two albums for RCA, neither of which sold; conventional wisdom -- which I have not been able to verify -- is that there were some unresolved legal issues around their leaving their previous band which did not sit well with Columbia Records, and that RCA essentially sat on the Brotherhood albums out of professional courtesy.

In any case, I'm a huge Raiders fan, so I am delighted to announce that this one is a very nice example of late Sixties pop psych and that you can rescue it from obscurity by downloading it here.

Also, and in the interest of full disclosure, I would be remiss if I didn't mention that I found the link to it -- and to the Wilderness Road and Milkwood albums I've posted in the last week or two -- over at the fabulous website Redtelephone66, whose proprieter, record collector Leonard Los, is apparently devoting his life to posting audio links to obscure late 60s and early 70s rock albums that have fallen through the cracks. Mostly from vinyl, I believe, but I've yet to download one that doesn't sound really really good.

In any case, he puts two or three new ones up every week and you really should go over there and give him some love.
Posted by steve simels at 7:59 AM

Those outfits ... ack!!!! I can't believe I lived through a time when that look was considered hip.

The P. Revere & the Raiders made some great music but they never looked hip, not ever!

I look forward to hearing what the guys could do w/o Paul & Mark.

Thanks for the Redtelephone66 link Steve; what a great find that blog is!