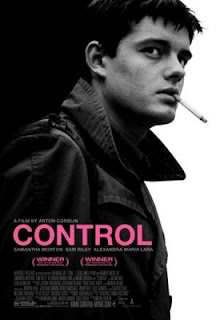 Hi, and welcome to a new feature here at PowerPop: Movie Monday. I'm going to try and post every Monday on a different music movie and hopefully we can chat about it some.

This week, I'd like to start with a movie Thers and I watched a few weeks ago which has been, for lack of a better phrase, haunting me. It's a British indie film from 2007 called Control, which tells the story of the tragically brief life of Ian Curtis, lead singer of Joy Division, who committed suicide at 23 in 1980.

The film features Sam Riley, a musician himself, who strikes many perfect notes as this troubled young man. Riley is almost as beautiful and intense-looking as Curtis was, if more classically handsome. (Riley was a model for Burberry.) But it's in his performance, haunted and haunting, that he really shines. Curtis's vision, his rise, his illness, his infidelity, even his death, are presented so sympathetically--though not romantically--that they make perfect, if depressing, sense. The film is based primarily on Deborah Curtis's book Touching From a Distance, a filter worth remembering.

The film obviously covers a lot of the same ground as 2002's 24-Hour Party People, in which Riley was also supposed to appear (as The Fall's Mark E. Smith), but was left on the cutting-room floor. Wilson seems much more obviously calculating here, the bands much more his puppets, though I guess that's no surprise. Still, it recreates that same 1976 Sex Pistols Manchester show where so much of what would become Madchester germinated. And Joe Anderson, the crazy brother from Across the Universe, is Peter Hook, so there's that.

It's a good film, even though you already know how it ends. Highly recommended, but expect to think about it a lot afterward.
Posted by NYMary at 3:52 PM

Absolutely loved this movie. Both unflinching and sympathetic at the same time.

I haven't seen it, and it sounds interesting, especially the period stuff, but I've always thought the cult of the Tragic Doomed Ian Curtis was a little bit of a boho cliche. Sorry if that sounds a little callous.

But back in the day, somebody asked Clive Gregson, of the contemporary to Curtis Manchester band Any Trouble what he though about the death.

Gregson, who knew him pretty well, said something to the effect that "Yeah, it's terribly sad, but you have to understand -- the guy was fucking nuts."

steve,
I think you'll find this refreshing: the suicide itself isn't poetic, but the film does a good job of acknowledging the accretion of stress and it makes a certain kind of sense. But it's not, you know, The Doors or anything.

What -- no weird Native Americans and pretentious dream sequences?
:-)

I've certainly never been part of the "Ian Curtis is God" cult (so shoot me...I like New Order way more than Joy Division, partly because I like Bernard Sumner's vocals way more than Ian Curtis), but I still would like to see this movie.

The only real complaint I've heard about it was that someone said that how could they possibly make a movie set in Manchester where it doesn't rain once?

I have to admit that I preferred 24 Hour Party People. It covered many of the same events in a much more economical fashion.

See, I thought 24 Hour Party People covered way too much ground, and so didn't get into the nitty gritty of why things unfolded as they did. I mean, I love the film, but it's definitely wide-ranging.

I for one cannot wait for the Happy Mondays movie, for example.