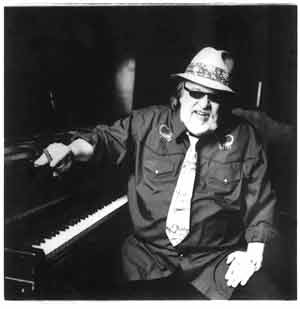 Dickinson, who died way too young on Friday, is one of the great unsung heroes of American vernacular music over the last couple of decades, a guy who moved effortlessly between blues, soul, rock, and even punk -- piano player on The Rolling Stones' "Wild Horses," producer of The Replacements' essential Pleased to Meet Me, and father of Cody and Luther, whose North Mississippi Allstars are hands down the best young modern blues rock band on the planet.

But the thing I'll remember him most fondly for is the absolute conceptual masterstroke behind his sort-of Memphis supergroup Mud Boy and the Neutrons. From the start, they planned to release four albums over a span of years, the titles of which would ultimately comprise a haiku. MB&TN only got to make the first three, but Dickinson used his final solo album to complete the poem.

The titles, in the order of their issue:

They Walk Among Us

In any case, from the third (1995), please enjoy Dickinson and the rest of MB&TN with their simply astonishing version of the blues classic "Shake Your Money Maker," which a friend once described -- accurately, I think -- as sounding "like the work of 5000 demented dwarves pounding away as if possessed."

Jim Dickinson will be missed.

What the hell is that a picture of? It looks like a voodoo doll made out of liverwurst.