Not So Great Lost Singles of the 70s: Special "Guess the Celebrity!" Edition

From 1970, please enjoy the country rock stylings of the appallingly monikered Carp and their ode to overindulgence, "Drink to the Queen of the May." 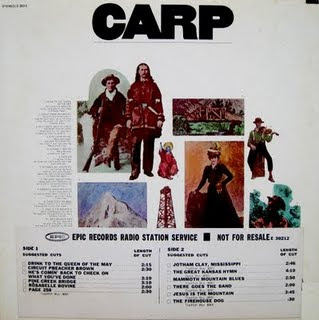 I bring this up only because Carp's pseudonymous drummer was pursuing a simultaneous acting career under his real name at the same time, and a few years hence he actually got an Academy Award nomination for his trouble. A coveted PowerPop No-Prize will be awarded the first reader who twigs his identity without recourse to the Google.

Incidentally, I should add that there were lots of bands that sounded like Carp around the time this was recorded, and that those guys, while a tad cloying, were hardly the worst of the lot. At least this lacks the infuriating moronic grinning optimism of Poco, for example.
Posted by steve simels at 12:01 AM

I won't reveal his real name, as I cheated via Google (never could follow directions - sorry). But I do remember him from his pre-Hollywood acting days as the redneck doofus character Teddy Jack Eddy on the local Tulsa Saturday night skit comedy show Dr. Mazeppa Pompazoidi's Uncanny Film Festival and Camp Meeting. Priceless! And definitely more fun than this mediocre song by Carp.

He sure made a good Buddy Holley though.

I should also add that I downloaded the entire album (over at redtelephone66) and this is by far the most listenable cut.

i wouldn't have expected a proselytizer of power pop to begrudge a little moronic grinning optimism (not that you've described Poco's production correctly).

Ah, what a sad cynic you are!

Decent happy music is actually pretty hard to do. I think the early Poco albums achieve it.

And yes, this sounds like a million other bands in 1970. And bad choice for a band name -- all a snarky critic would have to do is point out that their name is misspelled on the cover and the review is ovah....

I actually don't hate Poco. It's just that compared to the Buffalo Springfield from whence they sprang, it feels a little bit like Devo was right, if you know what I mean.
:-)

Actually, I really did hate Poco back in the day -- that "moronic grinning optimism" line is from some old review of mine in the early 70s.

But I've gotten over it in the intervening years...

I still think "You Better Think Twice" is one of the better country rock tunes of the era.

Agreed. Charming, actually, and it rocks.

If you swap the "R" and the "A" in Carp, it yields a succinct description of the music. But Busey's legacy as an actor cannot be faulted...