Ach! It's an Extremely Teutonic Early Clue to the New Direction!!!!

From 1965 (or thereabouts), please enjoy the incomparable and much-missed Peter Sellers as Dr. Strangelove as he conducts research into The Beatles hit recording of "She Loves You."

A song which, as was said of Pat Buchanan's famous speech at the 1992 Republican convention, probably sounded better in the original German. 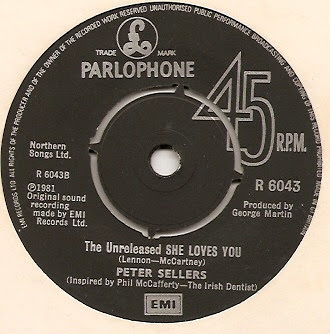 As always, a coveted PowerPop No-Prize will be awarded to the first reader who gleans the clip's relevance to the theme of tomorrow's Weekend Listomania.
Posted by steve simels at 8:33 AM

I can only imagine how thrilled the Beatles -- who like most British teens in the 1950s were huge Goon Show fans -- were to have Peter Sellers spoof their song.

Sellers remained a friend of the group for years -- in fact, there's a bootleg of early White Album mixes called The Peter Sellers Tape because the source was a tape Ringo had made for Sellers of their work in progress.

As for this week's Listomania, geez -- the only one that comes to mind is one I'm sure you've done before, hilariously inappropriate cover versions of familiar songs?

Gummo, one of the reasons why The Beatles were thrilled to be signed to Parlophone was because of the records George Martin made with The Goons.

Best George Martin productions other than The Beatles. (I know that's not it, but Edward took my first 5 choices.) :)

Oh my god, starting with Wagner . . . The whole thing is beyond funny.

If Edward's "yeah" guess isn't correct, then, then . . . what? What else is there? Something about Krautrock?

The roots of rap?

Most bizarre/over the top love songs.

I have one question about this recording: Why wasn't this on Dr. Demento all the time back in 1979?

It may be Peter Sellers but it reminds me of Animal from the Muppets. All that is missing is the rest of Dr Teeth.