Oh My God, It's Perhaps the Blandest Early Clue to the New Direction Ever!!!

Younger readers may not recall this, but there used to be a rabid conservative Senator in the 60s and early 70s named Roman Hruska. Apart from his rabidness, history has taken little note of him, and with good reason, but if his name rings even a vague bell today it is because of his famously innovative defense of complete crap.

Hruska is best remembered in American political history for a 1970 speech he made to the Senate urging them to confirm the nomination of G. Harrold Carswell to the Supreme Court. Responding to criticism that Carswell had been a mediocre judge, Hruska claimed that "Even if he were mediocre, there are a lot of mediocre judges and people and lawyers. They are entitled to a little representation, aren't they, and a little chance?"

In that spirit, from 1964, please enjoy -- if that is the correct word -- this extremely tepid live version of the venerable "Money (That's What I Want)" by the deservedly obscure journeyman Brit band The Wild Oats. 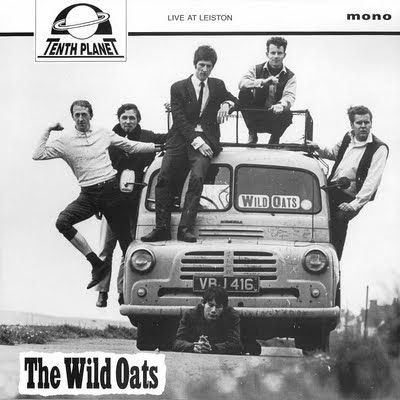 Seriously, these guys apparently had a devoted local following in the Suffolk area of the UK, but they never got a record deal and they were barely a footnote to a footnote to rock history before the above live album (an amateur recording done by two fans at a club gig) was exhumed in the mid-90s. They still do the occasional reunion show, I'm told.

In any case, and as always, a coveted PowerPop No-Prize will be awarded to the first reader who gleans the track's relevance to the theme of tomorrow's Weekend Listomania.
Posted by steve simels at 8:14 AM

Presuming something to do with covers or boring is too obvious:

Deservedly Obscure Bands. I am so going to steal that one, but not.
:-)

"Mediocre bands" seems both too obvious and too expansive.
So I'm going to go with "Bands in too-short pants who strike dorky poses, hanging off of lorries." Gotta be.

So I'm going to go with "Bands in too-short pants who strike dorky poses, hanging off of lorries." Gotta be.

Man, if I had a nickel for every time I heard somebody mention Roman Hruska in the last couple of decades, I might have a dime by this point. I grew in the Omaha area and I remember Roman Hruska and his fellow senator from Nebraska, Carl Curtis. One of them was the target of possibly the funniest political ad I ever remember seeing. There was a little wind-up man (with their name on their jacket) that marched back and forth across the screen carrying a sign that said NO! I don't remember for sure if there was any dialogue or not but if there was it wasn't much. I guess you had to be there.
As for the clue, I haven't the slightest idea. I'm going with songs or bands forever linked to Nebraska politicians.