Only Pretty, What a Pity: Redux

Okay, I posted about this song -- the Lovin' Spoonful's late pop/psych masterpiece -- last week, and I must confess to being sort of obsessed with it recently.

I've always liked it, of course, for lots of reasons, beginning with the fact that thematically it's an astoundingly dark and worldly wise song for a band pigeonholed as a purveyor of good time music. For another thing, it's structurally really quite clever; verse, chorus, verse, chorus, a bridge in a different tempo that seems to come out of nowhere, and then a final chorus, the kicker being that all the choruses have different lyrics and the Author's Message title phrase doesn't appear until the very end of the song. Plus it's gloriously melodic and gorgeously sung, and if you listen carefully to the very end of the fade-out, there are some really phenomenal sort of modal guitar licks being dispensed.

Check it out (the mp3 below is from the remastered CD reissue, whereas the YouTube I posted last week was taken from scratchy vinyl.) 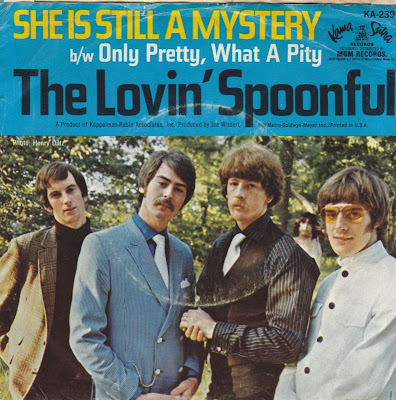 Eyes to look at, not to see through
She never could see truth for lies
With a smile she'd win us over
Face a trick to take a prize

"Mommy said, when you were younger
'The face you made would stay that way'
That's all true and if you doubt it
Reflect upon yourself today"

Only pretty, what a pity...

As I said, I've always liked it, and the second verse is absolutely brilliant -- in four concise poetic lines, writers Joe Butler and Jerry Yester manage to tell you everything you need to know about the arc of the sad, spoiled life of a vain and shallow woman; you can practically see her, her foolish monied husband (the earlier chorus bit about selling his horse is especially nice), and the house they lived in (on Fifth Avenue, if I'm any judge) before she dumped him and turned into a not so gay divorcee. I must confess, however, that I hadn't understood one crucial part of it until I read the lyrics on-line last week. That aforementioned bridge, where the vocal goes all robotic, is very hard to make out, but as you can see above it's the voice of Only Pretty's mirror giving her the naked truth; that sound of glass breaking at the end is her smashing it rather than face herself.

I should add that if I were a betting man I would put good money down that the song is based on somebody (or somebodies) real that Butler or Yester knew; fortunately, a certain blogger pal of mine is friends with Joe and his wife, and with any luck I will be getting the lowdown sometimes in the very near future.

Have I mentioned I've become sort of obsessed with the song?
Posted by steve simels at 8:51 AM

steve, what I love about you and your writing is the intensity of your enthusiasms; that's so rare in an age that prizes detachment and cynicism and the most important life-or-death issues of the day are treated as horse races to be gazed upon from afar with an ironic smile....

I thank you, sincerely.

Incidentally, the blogger in question is a certain Aquatic Feline of our mutual acquaintance.

The photo on the sleeve, who's that standing in the background? Zal?

Yes, although I think that's something the art director inserted.

In any case, I'm pretty sure Zal's actually playing on this (I remember seeing the original four do the song on the Ed Sullivan Show). If and when I talk to Joe, I'm going to ask about that....

I'm so used to thinking of Sebastian (along with Yanovsky) as the brains, brawn & beauty of the Spoonful, but this track really turns that on its head, and reminds me what I already knew, that they were an incredibly talented and tight group.

And great in the studio. They really were thinking in terms of records, not just songs.

Well worth the two mentions. You turned me on to this song over 40 years ago and I'm just as passionate about it as you are!

Also it's from the Spoonful's forgotten masterpiece "Everything Playing".

The A-side of that single is nothing to sneeze at, either.

Song reminds me of the George Orwell quote: "By age 40, a man has the face he deserves".

It's amazing to think that Steve Boone is alive somewhere going about the mundane tasks of daily life. These people are like figures from myth and legend to us.

The psych-pop band Still Life liked this song too. Google their "What Did We Miss?" to see how they rewrote it.

This is one of my favorite Spoonful songs. I especially like Joe Butler's drumming on it. According to the liner notes of the remastered version of "Everything Playing", they performed "Only Pretty, What a Pity" on "The Ed Sullivan Show". If anyone knows whether or not this clip is available to view online, please let me know.