An Early Clue to the New Direction? Yes, and It's a Thin Line Between Love and Hate...

From 1980, please enjoy Canadian New Wave outfit Red Rider and their huge in their homeland (but inexplicably not here) hit single "Don't Fight It." 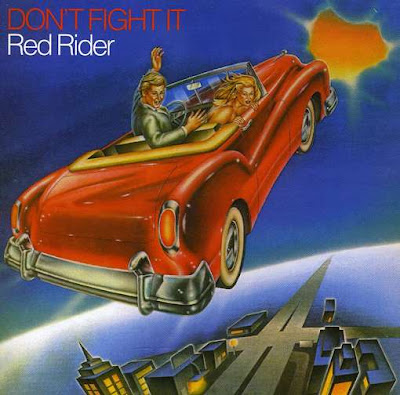 This is actually about 90 percent of a great record, but it's the ten percent that sucks -- i.e. most of the lyrics -- that simply drives me crazy. Everything about the music and performance here is just terrific, beginning with writer/singer Tom Cochrane's nasal dead on Jim McGuinn inflections on the titular choruses, and ending with one of the all-time great fade-outs with electronic handclaps. But jeebus fuck, with the exception of the aforementioned chorus, the words to this range from the merely incomprehensibly opaque...

...to cringe-inducing "Love is a Battlefield"-ish horseshit.

She likes her fever
She says, 'Take it like a man'
And we fight combat sometimes
But we don't fight it hand to hand

In any event, a coveted PowerPop No-Prize will be awarded the first reader who gleans the track's relevance to the theme of tomorrow's Weekend Listomania.
Posted by steve simels at 8:09 AM

My immediate thought is "Guilty Pleasures," but that seems easy.

So how about "sabotage?"

Coulda been greats, if it wasn't for....

It's really frustrating -- the music is just sooooooooooo good.

Biggest collection of cliches outside of modern Country music?

Favorite songs you don't really want to listen to?

I am so stealing "beating a dead metaphor."

Worst lyrics in a great song?

I played the hell out of that album in the late 70's. Didn't like the follow-ups as much, but they were at least different.

How about best or worst songs whose titles begin with "don't"? My computer's music library has 190 such songs (or versions, quite a few duplicates).

Post-Beatle songs that coulda been a contender.