Well, it's Friday and you know what that means. Yes, my Oriental under-the-counter-cultural ambassador Fah Lo Suee and I will be heading to fabulous Melbourne, Australia, ancestral home of Antipodean Asshat Rupert Murdoch. It is our plan to visit the grave of the Odious Aussie's father Keith, with the intention of consuming a case of Foster's and then pissing on the old man's headstone. Mean-spirited, I'll grant you, but certainly not as reprehensible as junior's minions hacking the cellphone of a murdered girl.

In any case, and because things will doubtless be fairly quiet around here until our return, here's a (hopefully) fun little project to help us all wile away the idle hours:

Best or Worst Parody or Pastiche By (Or Of) a Pop/Rock Artist, Song or Album!!!!

No arbitrary rules, except don't bother nominating Robbie Fulks' "Fountains of Wayne Hotline" as I've already pretty much flogged that one to death lately. And yes, we've done something like this before, but a) I needed an excuse to post that Peter Sellers record yesterday and b) it's been really too damned hot this week so cut me some slack. 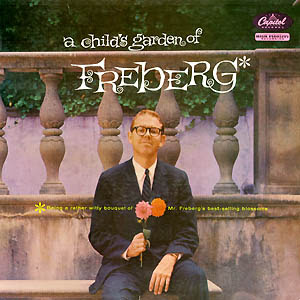 From 1957, still the funniest Elvis take-off ever. Freberg, of course, was a jazzbo hepster, and probably didn't much care for The King or for rock 'n' roll generally, which is the kind of thing that gets the knickers of snobs like Dave Marsh into a twist. Me, I was ten years old at the time and loved Elvis and thought this was hilarious anyway. Still do.

4. The Haircuts -- Raindrops Are Falling

On the other hand -- and I love Sid Caesar, Carl Reiner and Howie Morris -- this (and all the other Haircuts skits I've seen) strikes me as an outsider's parody that doesn't really work. Your mileage may vary, of course.

A remarkably faithful slightly over-the-top cover of an earlier r&b hit by Maurice Williams (of "Stay" fame). The irony is that The Diamonds, a bunch of (obviously white) Canadians who would have preferred to be singing jazz or standards, thought the song utterly ridiculous and considered what they were doing a satire. And yet the result remains one of the most genuinely exciting early rock records ever made.

Words fail me. Incidentally, there used to be a priceless video of these guys doing this live, complete with scarves that stood straight out regardless of the wind at the time, on YouTube, but it seems to have been taken down, alas.

And the Numero Uno "uh, right" [said in a Bill Cosby voice] performance by a rock personage or personages simply has to be:


Cold-hearted orb that rules the night
Removes the colours from our sight,
Red is grey and yellow white
But we decide which is right
And which is an illusion.
Pinprick holes in a colourless sky
Let insipid figures of light pass by.
The mighty light of ten thousand suns
Challenges infinity, and is soon gone.

Night-time: to some, a brief interlude,
To others the fear of solitude.
Brave Helios, wake up your steeds!
Brings the warmth the countryside needs

Seriously, for years I thought this was deliberately meant as a joke, until I discovered that the drummer wrote it. If you know what I mean.

The sad thing is...I'm not sure either of these are parodies. (And I can't believe neither was included in your Top Five!)

Sebatian Cabot's exciting take on "Like a Rolling Stone":

William Shattner's stunning (and I do mean stunning) interpretation of "Rocket Man":

Freberg's inclusion brings to mind my absolute favorite by him: The Old Payola Roll Blues

"Meaningless Songs..." Oh my god, my wife is going to die when she hears this.

As to "Little Darlin'," I knew it was over the top, but I had no idea it was intended as parody, and when I bought The Doo Wop Box, I was disappointed to have The Gladiolas' version rather than The Diamonds'. Their version reminds me of what may be my favorite parody song, Big Daddy's "You Don't Bring Me Flowers."

J. just mentioned Big Daddy, whose first album pretty much takes this whole category. Have to say their Pat Boon version of Super Freak is my favorite of the lot.

I've never quite figured out if The Washington Squares are supposed to be a parody or an homage to Peter, Paul and Maryesque folk rock, because they are quite listenable. Their earnest cover of Leonard Cohen's Everybody Knows could be a parody.

In the worst category: Elton John's Crocodile Rock and pretty much anything by Billy Joel (please tell me they weren't serious).

National Lampoon's Lemmings and other LPs are certainly deserving of a prize for their spot-on parodies: Lennon's Magical Misery Tour, James Taylor's "Highway Toes," Neil Young's "Southern California Brings Me Down," and the scandalous "Pull the Tregros" - a searing yet hilarious indictment of Joan Baez..."Just because I cant be there/ doesn't mean that I don't care/"So next time, brother, off a pig for me."

I'm not sure this is a perfect fit, but I recommend it anyway to one and all: "Englishman, German, Jew Blues" by B.B. King (and Albert Brooks).

There's a live clip on YouTube of the Diamonds doing Little Darlin' (lipsynch) on some 50s TV show.
http://www.youtube.com/watch?v=sI_LVtatBsU

You can tell they felt they had made a novelty record.

The Rutles, of course. Neil Innes' songs are a perfect cockeyed twist on Lennon/McCartney, and get played now and again on Sirius/XM's fabulous Underground Garage channel.

A big, big second to Big Daddy. Their first disc is probably the best, but their take on Sgt Pepper deserves an honorable mention. "Lucy in the Sky with Diamonds" filtered through Jerry Lee Lewis is roll-on-the-floor funny, but "A Day in the Life" done as Buddy Holly is unexpectedly poignant. Highly recommended.

This one includes The World's Worst Guitar Solo.

Ugh, I have an awful cold and I'm messing up my posts.

That's a link to the Bonzo's Canyons of Your Mind, the best 50s ballad ever.

This is a great column theme, perfect for a slack Friday.

Me First and the Gimme Gimmes should make this list somewhere. It's hard to pick just one. I have a soft spot for "...Ruin Jonny's Bar Mitzvah".

Also, outside the genre, but that PDQ Bach guy is/was pretty hilarious.

The head guy for the Washington Squares (I forget his name) told me they were a joke.

I saw them a couple of times, and yeah -- parody.

Tom Goodkind, the guy you were referring to, thought it was an interesting ironic gimmick. As did the "chick" in the band, Lauren Agnelli, who was a rock critic who had been in punk bands.

I think eventually they convinced themselves that they were actually Peter Paul and Mary, but mostly it was dripping with snark.

Oh well, they are still fun to listen to.

Let's not forget Little Roger and the Goosebumps for
Stairway to Gilligan's Island and Kennedy Girls.

And while we're mentioning Neil Young parodies, Jimmy Fallon's duet with Bruce on Whip My Hair was pretty damn hilarious.

And speaking of Bruce, The Flintsones Theme by Bruce Springstone was perfect.

Do the Way Outs on the Flinstones count? How about the Beau Brummelrocks?

Spinning into complete free association at this point.

RE: The Washington Squares. I really liked "Can't Stop The Rain" and took it as authentic 60s retro But they lacked the unadulterated love and respect required of good parody (ie, "A Mighty Wind") or of worthwhile retro (as opposed to, say, The Cheap Suit Serenaders or The Harry Smiths). And the one time we shared a bill with them, they were unpleasant to work with.

Laura Agnelli had way too many chances to make it big. But the Washington Squares' "Everybody Knows" is straight up great. They do a strong, strummy version of "If I Had My Way" (calling it Samson & Delilah), and have some good originals in "New Generation" and "The Other Side of Sin" and "Fourth Day of July" (if that was an original). You could see they were kind of idiots who were parodying something earnest they only half-understood, but by the alchemy of pop, they accidentally came up with a few great cuts (and more than a few clueless and awful cuts like "Neal Cassidy").

That Washington Squares version of "Everybody Knows" is one of the few decent cover versions of a Cohen song I've ever heard. There was a Cohen tribute album a few years ago that I just didn't like.

The only other one I can remember is Jeff Buckley's version of "Hallelujah."

I'm with Shriner. My vote is for "Old Payola Roll Blues" (if both parts one and two are included). This is definitely an "outsider" parody, from someone who expressed his disdain for R&R on many occasions. Could Jesse White be any better on this?

The Heebeegeebees cut was beyond fantastic. Considering that I love the Bee Gees, I can't get enough of parodies of them. This might have been the funniest I've ever heard.

Stewie Griffin's cover of William Shatner's cover of "Rocket Man". They're both on YouTube, play them side by side for the best effect. Here's their duet: http://www.youtube.com/watch?v=oU4SBTm-Rac

The rutles are gods, and what about Dread Zeppelin?

No surprise, perhaps, but sad all the same.

The Moody Blues' record is interesting because its basically a pastiche of Gustav Holst-isms between the "pop" numbers ie. this:
http://www.youtube.com/watch?v=Nz0b4STz1lo
I get the feeling the Moodies were 100% serious though...
Someone mentioned The National Lampoon. Their Dylan number is very funny "I'm out behind the barn..."
These seem to be parodies of something...
"Hocus Pocus" "Gimme dat Ding", "Monkberry Moon Delight",
Na na nananana Hey Hey Hey Goodbye", "Hooka Chacka-Hooka Chacka" and Norman Greenbaum's follow-up to Spirit in the Sky:
"When ya gonna buy me a canned ham? I've been waiting so long..."
The flip side of the Mighty Quinn
http://www.youtube.com/watch?v=MqJaUxweI6g
which I listened to far too many times...