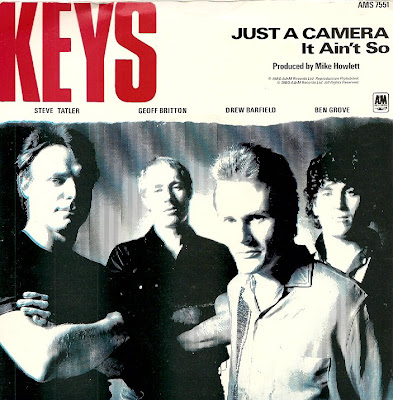 I know next to nothing about this band except that they were on A&M and that their astoundingly good eponymous 1981 album was produced by Joe Jackson(!). Of course, said album was never released in the US and has never been available on CD, which is probably why the group did not register on my personal radar until a few days ago.

there's a hint of the Police here, but I mean that in a good way. Much better chorus than the Police tended to have. great harmonies, nice intricate guitar work. wonder what happened to them?

Some of them went on to a band called The Big Heat who were produced by Elvis Costello, it seems.

After that, the rest is silence, as the poet sez.

It didn't remind me of the Police, but it certainly has an early 80's sound that nudges the nostalgia centers. Nice.

I found this out there on the net:

"The Big Heat were Drew Barfield, Bill Hurley and Chris Parks. In 1985, Drew wrote and Elvis Costello produced the single “Watch Me Catch Fire”. This was a hit song waiting to happen, instead the Bradford Football Stadium fire happened and the song was dropped from the BBC playlist - because of the title."

Never heard of these guys.

(How many would-be Great Bands were suffocated when consultants began programming FM radio? But that's a topic for another day.)

Anyway, thanks for letting us in on The Keys.

This was a damn fine album, and I still have it in my collection. Actually I get quite a bit of 60's influence in it which is why I bought it when I was 14 in 1981. Still plays well today 35 years later.