Well, it's Friday and you know what that means. Yes, my Oriental manual catharsis specialist Fah Lo Suee and I are off to...well, actually, truth is we're not going anywhere due to a bizarre picture-hanging accident that I'd really rather not get into, except to say "If you drink, don't drill."

In any case, things are still probably going to be quiet around here for the duration of the weekend, so until Monday rolls around, here's a fun little project to help us wile away the idle hours:

No arbitrary rules, although we're obviously talking about the immediate post-First Generation Punk period, roughly from the late 70s to 1983 or '84.

And my totally top of my head Top Six is/are:

6. The Brains -- Money Changes Everything 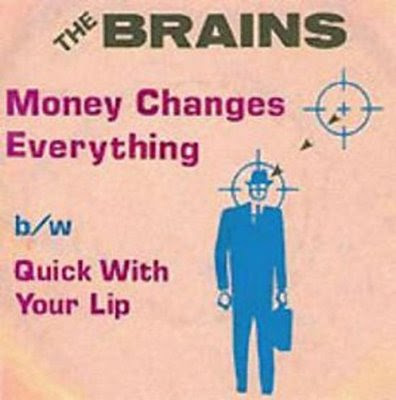 The original indie single, not the remake on the Brains' album. I'm not a huge fan of Cyndi Lauper's more familiar version, but she knew a great song when she heard one. [h/t Sal Nunziato] 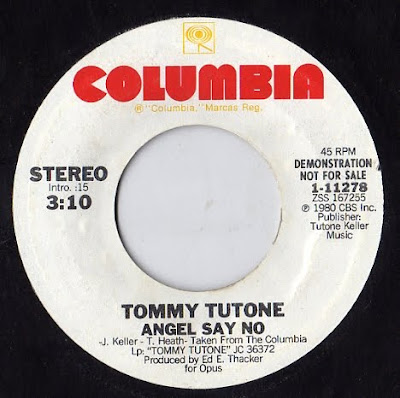 Yes, these guys actually were Two Hit Wonders, and this is the one that doesn't have a phone mumber in the title. If truth be told, I've always preferred it. 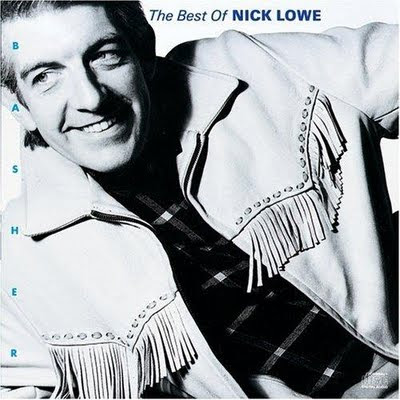 A wonderful John Hiatt song (Chris Hillman's Desert Rose Band had a country hit with it, and deservedly) and probably my favorite Nick Lowe record that Nick didn't write himself.

Yes, I know the drummer played with Zappa and yes, Dale had a nice rack. The music, however, remains mannered pretentious crap and a cliche at birth. IMHO.

One of the countless great pop tunes Bruce Springsteen gave away back in the day, and one of my long-time faves.

And the Numero Uno steaming pile of crap from those Fabulous Eighties simply has to be...

A thoroughly awful record, obviously, and sweet Jeebus, Rindy Ross has to be the lamest sax player in music history.

Gotta say my absolute favorite Tommy Tutone song is Cheap Date, which my college radio station played a LOT. It had this great better-than-live guitar sound, sardonic lyrics, and a nervy attitude with just enough vulnerability. I'll never understand why it wasn't the huge hit that Jenny (867-5309) was a year later.

In the most hated category, there were a couple of songs from Patti Smyth (solo and as the singer of some forgotten-name band) that were dreadful. She was cute as a bug in the videos but that was just about it.

Maybe something from the Smithereens can fit in here too, although their major-label discs fall a bit outside of your timeline; I always liked Only a Memory and House We Used to Live In a lot.

ONG - I LOVED that Brains' single! Yes, much superior to the album version.

And I'm sure I'll get a ton of death threats, but I HATED "My Sharona". "Good Girls Don't" was passable, but really, the Knack SUCKED. I said it and I'm glad!

My ultimate skinny-tie band has to be Squeeze: "Is That Love," "Another Nail Through my Heart," "Annie Get Your Gun." As often as not I still choose them over over other Thatcher-era stalwarts like Lowe or Costello.

Ian Drury's "Hit Me with Your Rhythm Stick."

And as pinball-playing jukebox music at Grandpa's bar in the basement of my building in Chinatown I'm not embarrassed to admit Devo's "Whip It" and "She's So Cold" by you-know-who. At the Kettle of Fish Frank Christian knew the only way he could get me off the table was to play CSNY's "Helpless." All it took was that whiny guitar riff in the intro and that sloooow tempo and my game was toast.

More Squeezes: If I Didn't Love You and Tempted

Dave: Many Knack apologists (exhibit A, "Good Girls Don't") hate "My Sharona" with a passion.

Does anyone remember the Mike Chapman-produced Yachts? They had some great hooks, but a generally off-putting aloofness that was skinny-tie at it's worst.

Squeeze's "Tempted" and "Black Coffee in Bed" were great pieces from a terrific band.

Joe Jackson's "Breaking Us In Two" is on my skinny-tie list.

i liked "Too Bad"..doug and the slugs- although doug's tie in the video is rather wide so maybe it does not qualify.

I went bananas for "Tell It To Carrie" by The Romantics, but like The Brains, it was the original indie single mix that knocked me out and not the major label album track.

She didn't wear skinny ties, but she bopped. Cyndi Lauper - she bop.

Favorite album would have to be Elvis Costello's debut, not a snoozer cut in the lot.

For total dreck I'd choose Nick Guilder's "Hot Child in the City" - never fails to make me cringe.

Coming from the Detroit area -- the first Romantics album is stone classic from the era. I still break that out when I'm looking to play my guitar along with an album.

And I love "My Sharona" (but not the single version with the edited guitar solo.) And I do not apologize for my love of the Knack (all 6 albums -- even the dashed-off ...But The Little Girls Understand).


The problem with trying to figure out "dreck" from that era is that it's so long ago (now), that if I don't listen to it now, I didn't listen to it then, so I've forgotten it.


OK -- I hate "Sunglasses At Night". Does that work for everybody?

Overlooked Tommy Tutone gem: "Why Baby Why" from Tutone-2.

I'm getting a kick out of this Knack backlash. For me they were a band I liked only upon reconsideration, and then I loved 'em. "Sharona" is something considerably less in the single version which whacks half the guitar solo.

I thoroughly concur on all the above, particularly Squeeze, although to be honest I've never made up my mind up about the Knack.

I do know that when they remixed and remastered "My Sharona" for that Ethan Hawke/Janeane Garafolo movie it's in, I was surprised how impressive I thought the instrumental work was. Lyrics notwithstanding, that tracks rocks like a mofo....

I know it's heresy but I much prefer Steve Lillywhite's gigantic production of "Money Changes everything." I'd say there's pretty much nothing I like about the production values of the single. It plods along to me.

I'll second the Joe Jackson love and expand it to nearly damned every track he recorded between 'Look Sharp!' and 'Night and Day.'

Oooh, music of my youth! Bring back The Rat in Kenmore Square!

No love for the almighty Plimsouls, a goddamned great American rock 'n roll band? ("A Million Miles Away" is the one everyone knows, 'tho I believe my personal fave to be "How Long Will It Take.")

Related: Jack Lee ("Hanging on the Telephone") and Paul Collins ("Rock 'n Roll Girls"). I saw Mr. Collins in a shitty bar recently, and he couldn't have been making anything but gas money, and he still rocked. Tip my cap...

Whatever became of Bram Tchaikovsky? ("Girl of My Dreams").

"Starry Eyes" - The Records. "Do Anything You Wanna Do" - Eddie & The Hot Rods

Local Heroes: The Cars, 'til tuesday, Robin Lane & The Chartbusters, The Real Kids.

(And Steve - I actually SAW The Brains live. After-party at a local club the night The Clash played UVM - 1984? LOUDEST band that I had seen up to that point..)
- Bill Buckner

Hokey smokes - the Yachts? I actually had that album! Although got it as a promo.

NO:
Huey Louis & the Snooze

FACT:
The middle bridge of My Sharona OWNS!!

oh, oh, I've been waiting to put this one into a Listomania for a long time -

From the first moment with the great opening riff, great synth and vocal, and the fabulous fadeout with dueling guitar and synth. I don't know if this band ever did anything else, but I remember loving this song from day 1 hearing it on the radio. It's probably my nomination for the perfect One-Hit Wonder song ever.

Gotta go with the lovers of 'My Sharona', especially the bridge, as ID'ed by Ms. Rosa.

I'd also second the nomination of She-Bop/Ms. Lauper by Michael, although to me that entire She's So Unusual album holds up really well still. I don't think it's just nostalgia.

For my least favorite, the Romantics - 'Talking in My Sleep' ranks pretty low, which is strange, given that I actually like 'What I Like about You' (beer commercials notwithstanding) a whole lot. But (AFAIK) Steve is correct that Quarterflash really is untouchable in the awfulness content.

Just too much good from that period to even begin to prioritize. How about most of the Stiff Catalog? And don't forget The Jam, Dave Edmunds, Rockpile,dozens of local bands, etc.

But stuff to Hate, now we're on to something.

Start with Billy Joel's skinny tie backlash "It's Still Rock n Roll to Me". Not sure if "We didn't Start The Fire" fits the time frame, but the boy was slow to react so throw it in.

Would have to dig through the collection to find more, but know they are there..

Can we include groups that tried to cash in on the skinny tie era even if they were not originally of it? In which case, herewith a nomination for The Searchers' Sire work in general, and "Hearts in Her Eyes" specifically.

at the time I loved My Sharona as it cut through all the disco on the radio.

But now I can't figure out the weedlie-deedlie guitar solo welded onto that song. It rocks but doesn't fit.

The Only One's "Another Girl, Another Planet" is the only thing that matters from that era. Everything else is just crap compared to it.

Padre: "Another Girl, Another Planet" IS cosmic, but ... we're talking about the period that gave us "Shake Some Action" for heaven's sake.

I'd have to go with Blondie's Dreaming as the best single of this era, but would put Girl Of My Dreams as #2.

To follow up on Bob S.:
Drums on Blondie's Dreaming are just awesome!! (belaboring the obvious, I suppose...)

I never liked Joe Jackson. The production, the musicianship - pretty awful. He sang like Elvis Costello with his nuts in a vise.

It may surprise folks to hear that the first Hooters album - the indy one - was some first-rate skinny-tie pop. Then they got signed and the suckage began; I always hated them for selling out so utterly.