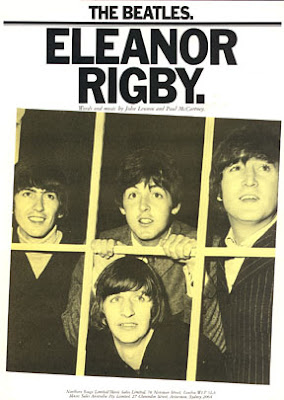 I don't even know where to begin about this one, except that Martin has said that the down-stroke string stuff that begins at approximately 1:27 seconds in was inspired by Bernard Herrmann's music for Hitchcock's Psycho, i.e. the shower scene.

Which is to say that a manipulative slasher movie begat one of the great 60s odes to existential alienation.

Note to self: Backing Track Mania may be abating sooner than expected.
:-)

It may be heresy, but I must confess that "Eleanor RIgby" leaves me cold; maybe it's just way too overfamiliar...

And isn't it sad that on stage McCartney now uses a synthesizer for the strings on "Yesterday"?

I have a cd of beach boys backing tracks that came with a little book of chords and tabs, which may have been a little more readable when it was an LP. still very cool!

McCartney always used a synth for strings as far as I know, wings over america etc. whats REALLY sad is, no more horn section - those guys rocked!

I think we know this one too well.

It's not that we know it too well, it's that there's nothing that exciting going on here. The strings are just keeping time, playing the drum part. Half-hearted melodic decoration wanders in and out, alternating occasionally with that stabbing "Psycho" thing. There's no guitar in Eleanor Rigby. The arrangement is pompous and portentious of nothing. Compared with the startlingly simple, organic elegance of "Yesterday", Eleanor Rigby sounds like its trying too hard -- not quite as bad as "She's Leaving Home", but in the neighborhood.

Actually, what I think is really interesting is how under-valued ANTHOLOGY was at the time.

I think it sounds very cool.

Bernard Herrmann crossed with just a touch of Philip Glass.

Gets me in the mood for Masterpiece Theatre!Keep'em comin!